Section 18: Women Workers in Construction and Other Industries

The numbers of women employed in construction have grown substantially, by 73.5% from 1985 to 2005, a change that largely reflects an expansion of construction employment and an increased rate of labor force participation among women over time (chart 18a).1 Since 2000, nearly 193,000 women workers joined the construction industry, which changed the proportion of female construction workers from 9% in 2000 to 10% in 2005 (chart 18b).

Women workers' share of production – or blue-collar – work has remained low, compared with other industries (chart 18c). The proportion of women production workers in construction is about one-sixth the level for all industries.

Although the largest portion of female workers in construction – 52% – is still administrative support staff, the proportion is much smaller than it was 20 years ago (chart 18d). Of the women employed in construction in 2005, 27% were in managerial or professional occupations, compared with only 16% in these occupations in 1985. The changes partly reflect a reduced need for administrative support staff due to office automation, plus an increased demand for managerial skills.

In 2005, about 53,000 women were construction laborers and helpers. In addition, nearly 115,000 women were employed in blue-collar occupations, including painters, repair workers, operating engineers, electricians, carpet and tile layers, carpenters, welders, heating and air-conditioning (A/C) workers, and plumbers. (The occupations are listed here in order of decreasing percentages of women; 4% of women construction workers are painters and less than 0.5% of women are plumbers.2)

Men and women in construction appear to have similar patterns in terms of who they work for: roughly 76% of women and 72% of men work for private employers, while 4% of each are government employees.

Women's participation in construction will continue to be shaped by women's overall workforce participation, as well as by the supply-and-demand trends within the industry. Given historic trends, women may continue to be approximately 10% of the industry, in blue (production), white (management), and pink (administrative) collar jobs. 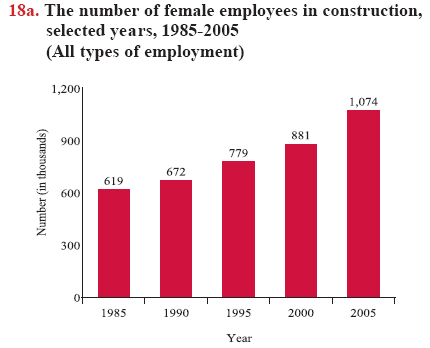 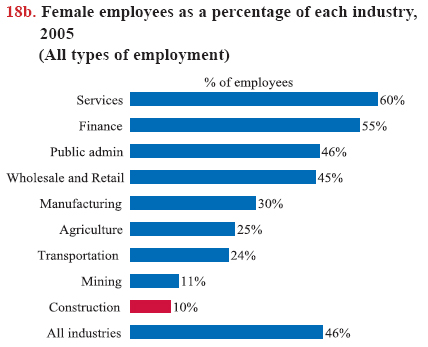 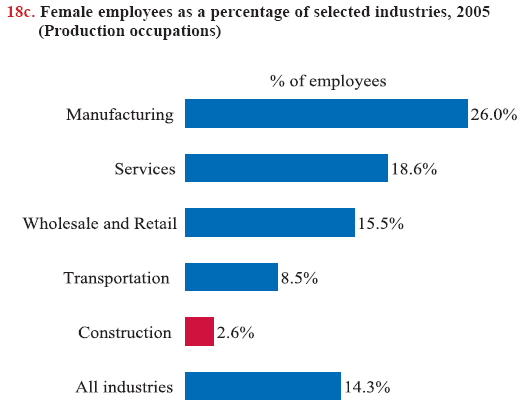 1. All numbers in the text are from the U.S. Bureau of Labor Statistics, 2005 Current Population Survey. Calculations by CPWR Data Center.

2. When broken down into specific occupations, the sample size is too small to be statistically valid.

Note:
All charts - See list of occupations on chart book page 10; the figures are 12-month averages.

Chart 18c - Industries not shown in the chart include Agriculture, Mining, Sanitation, Finance, and Public Administration because the statistical samples were too small.