Section 19: Employment and Unemployment in Construction and Other Industries

Construction employment expanded more rapidly than nonfarm payroll employment: 67% for construction and 25% for all industries respectively from 1992 to 2006 (chart 19b).

The Current Population Survey estimates are updated to incorporate new information from censuses and new estimates of immigration. Starting with 2003, in addition to changes in industrial and occupational classification systems used in the population survey (see chart book pages 1 and 10), the U.S. Bureau of Labor Statistics replaced (statistical) sample weights based on the Census 1990 population controls with the Census 2000 population controls.2 As a result, for instance, the Hispanic population estimate increased by 8% from 1990 to 1999.3 Similarly, the payroll survey adjusts its benchmark once a year based on a sample of the tax records filed by nearly all employers with state employment security agencies. For example, over the past decade, absolute benchmark revisions have averaged 0.2%, ranging from less than 0.1% percent to 0.6%.4 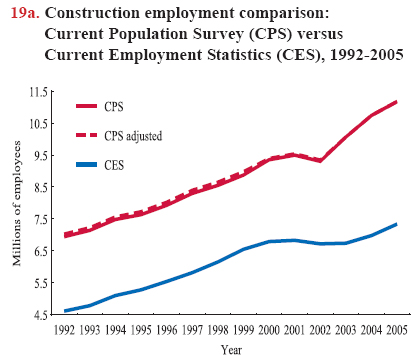 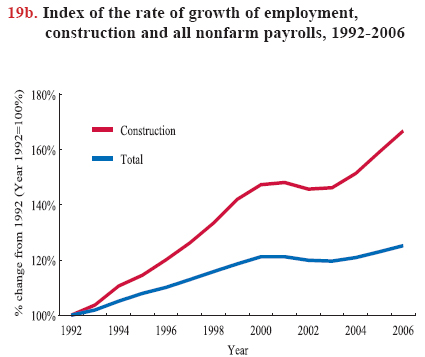 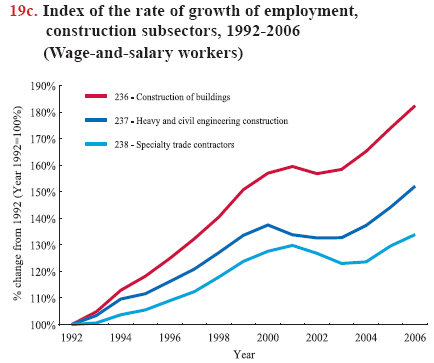 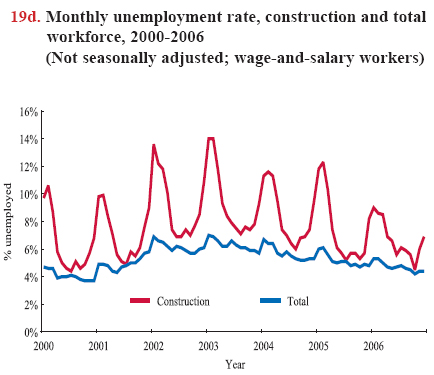 1. The average yearly unemployment rate was 6.7% for construction and 4.7% for all nonfarm workers in 2006. Self-employed and workers in public sectors are excluded in this comparison.

Note:
Chart 19a - Covers all construction occupations, including managers and clerical staff.

Chart 19d - Data are gathered monthly, are not seasonally adjusted, and cover unemployment only among private-sector nonfarm, civilian wage-and-salary workers, excluding self-employed workers. The tick for each year on the x-axis indicates January.