Section 20: Self-Employment in Construction and Other Industries

Self-employment data are collected monthly as part of the Current Population Survey (CPS) of the U.S. Bureau of Labor Statistics (BLS; see chart book page 9). The survey classifies respondents according to industry and occupation, but also subdivides employment by class of worker, that is, wage-and-salary employment, self-employment, and unpaid family work.

Additional data on self-employment is available in the Economic Census produced by the U.S. Census Bureau (chart 20c). The Census Bureau obtains data on establishments without payroll from the administrative records of the Internal Revenue Service and the Social Security Administration. The proportion of nonemployer establishments increased 22% since the 1970s (see chart book page 3). (The number of establishments, however, does not correspond to the number of owners.)

The BLS also lists the self-employed as "independent contractors" and as one type of "alternative work arrangement" with on-call workers, or employees of a temporary service company or contract (leasing) employment company (see chart book page 21). In some cases, employers are believed to misclassify employees as independent contractors to avoid paying Social Security, workers' compensation, and other taxes. For example, studies estimated that at least one in seven construction employers (14%) in Massachusetts and Maine misclassified full-time workers as independent contractors or self-employed,4 and those employers misclassified 48% of construction workers they hired (chart 20d). 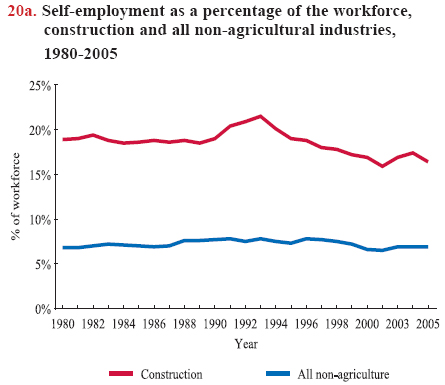 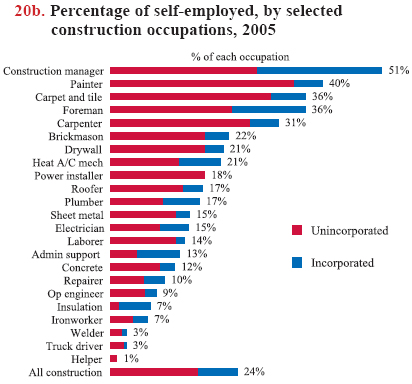 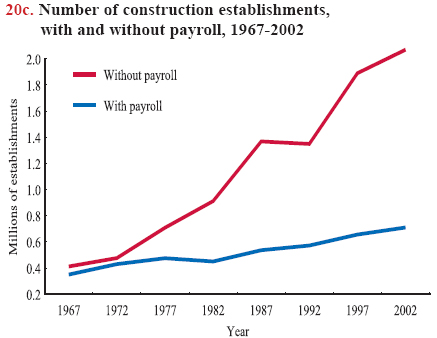 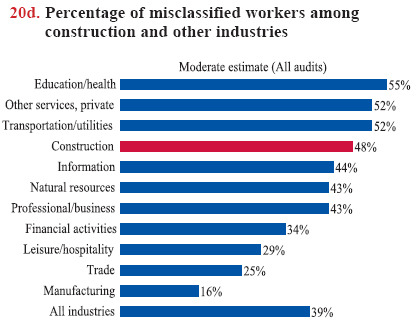 Chart 20b - Because of the sizes of the statistical samples, estimates vary + or - 5%, except for power installer, insulation, ironworker, and sheet metal, for which the estimate may vary from the actual by + or - 8%. See listing, chart book page 10, for occupational groupings.