Vehicles and mobile heavy equipment were involved in 469 deaths (37.7%) out of a total of 1,243 construction deaths in 2005. However, vehicles were not always listed as “cause of death” in these fatalities. Causes of deaths varied: "struck by" a vehicle and highway collisions were obviously caused by vehicles and were categorized as such. Other deaths involving vehicles were identified in the U.S. Bureau of Labor Statistics’ (BLS) categories "caught in/between" and "falls," such as a worker being caught between parts of a dump truck or falling from a piece of mobile heavy equipment.

Among deaths from vehicular incidents on streets and highways, just under half (49%) were due to collisions with other vehicles. Of non-collision deaths, 18% were due to vehicles striking stationary objects (mostly trees), and 16% were due to rollovers.

Dump trucks were involved in 44 vehicle-related deaths (9% of the total 469 deaths) in 2005. A study identified 525 dump truck-related deaths in 1992-2002, or about 50 per year.1 According to the study, major causes of death included 220 deaths from being struck by a dump truck (42%), 158 deaths from highway incidents (30%), and 47 deaths from being caught in/between dump truck equipment (9%). Worker locations and activities at the time of death included worker on foot near a dump truck (42%), dump truck operator in or around the truck (39%), and worker maintaining a dump truck (10%). Half of the 220 struck-by deaths happened to on-foot workers who were struck by dump trucks backing up. About 20 deaths happened to on-foot operators who were run over by their own dump trucks. Of the 204 dump truck operators killed, 122 (60%) were involved in highway incidents: collisions with trains accounted for 17% of these deaths. At least 30 (25%) of the operators killed on the highway did not have their seat belts fastened. The 28 workers killed (53%) while maintaining or repairing dump trucks were caught between the dump truck frame and a falling dump body.

Mobile heavy equipment also played a role in trenchrelated deaths (chart 39d). Of the 159 deaths occurring from 2003-2005, being struck by vehicle loads or vehicle parts, especially excavator buckets, each accounted for 12 deaths (8%). By far, cave-ins caused the most trenching-related deaths – 113 deaths (71%). In 38 of the 113 deaths (34%), the Census of Fatal Occupational Injuries indicated there was either no shoring, or support for the trench walls was inadequate. For 64% of deaths, there was no mention of support. Construction laborers were involved in 65 of the trenching-related deaths (41%). 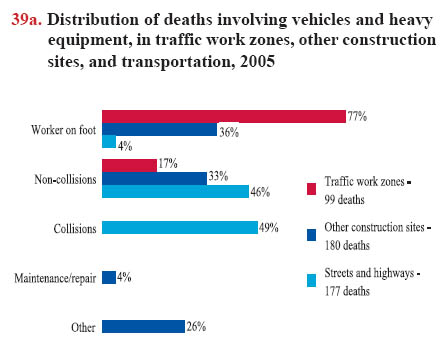 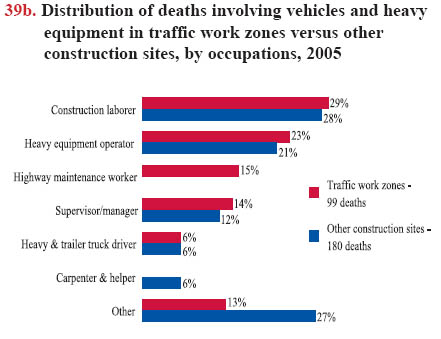 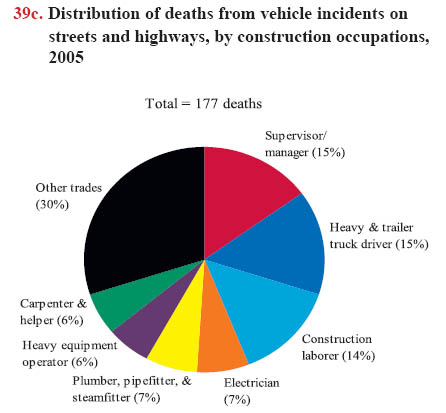 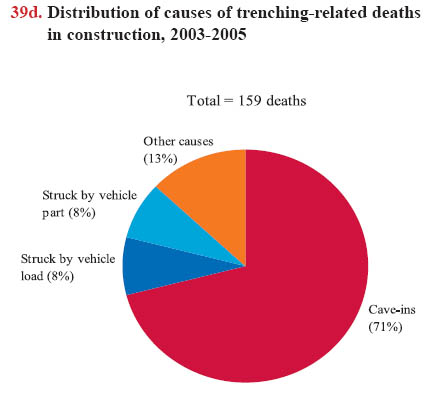