Cigarette smoking, obesity, diabetes, hypertension (high blood pressure), and high blood cholesterol are major risk factors for coronary heart disease.1 Cigarette smoking is also associated with a tenfold increase in the risk of dying from chronic obstructive lung disease.2 The adverse health effects from cigarette smoking account for nearly one of every five deaths in the United States, more than by all deaths from human immunodeficiency virus (HIV), illegal drug use, alcohol use, motor vehicle injuries, suicides, and murders combined.2

Although people are well aware that smoking is harmful, cigarette or tobacco smoking is still widespread, particularly among production (blue-collar) workers. In 2005, nearly 38% of workers in construction trades were current smokers, about 1.7 times that of all industries (chart 46a). The risk of chronic lung disease and cancer from smoking is increased among construction workers due to other hazardous respiratory exposures, including welding, silica and asbestos (see chart book page 43).

Obesity also has been linked to stroke, diabetes, and several other chronic conditions. The prevalence of obesity among adults, as measured by a body mass index (BMI) rating (see Glossary), has doubled in the past two decades.3 In 2005, about two out of three (66%) construction workers were either overweight or obese, compared with 59% for all industries combined (chart 46b).

Diabetes is a serious chronic illness that greatly increases the likelihood of developing disabling health problems and is the sixth leading cause of death in the United States. The risk of diabetes increases with age. Approximately 10% of the U.S. population over age 40 and 21% of those age 60 or older have this disease. 4 During the last decade, the prevalence of diabetes dramatically increased among workers in construction trades, particularly in those over age 55 (chart 46c). Approximately 7% (21 million) of the entire U.S. population have diabetes; of those, an estimated 6.2 million people are undiagnosed.5 According to a medical screening program among construction workers, about half of the diabetics identified by the screening did not know that they had diabetes.6

Worksite health promotion programs have proven to be effective in other industries, but novel approaches to promoting healthful behaviors are needed in construction, where workers change job sites frequently and thus may have limited access to worksite health promotion efforts. Since programs tailored specifically for construction workers to reduce smoking were successful, 10, 11 similar efforts should continue and target other health outcomes, such as reducing hypertension and diabetes in the construction worker population. An important characteristic of these successful programs was that information about smoking cessation was integrated into training about toxic exposures at work and/or presented in a way that was tailored for a blue-collar population. A systems approach, focusing on developing workplace policy and practices to promote health rather than simply focusing on individual behavior, appears to be more effective.10, 11 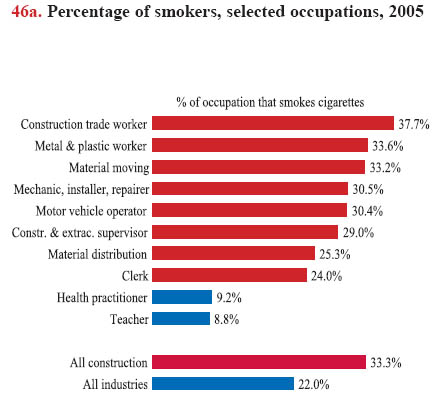 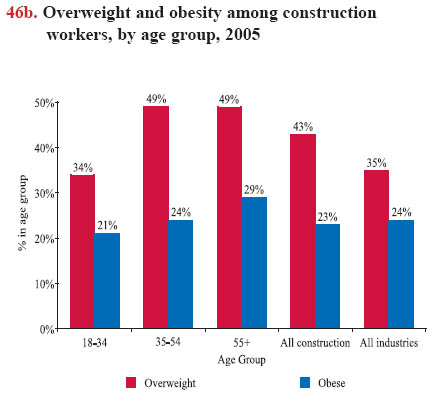 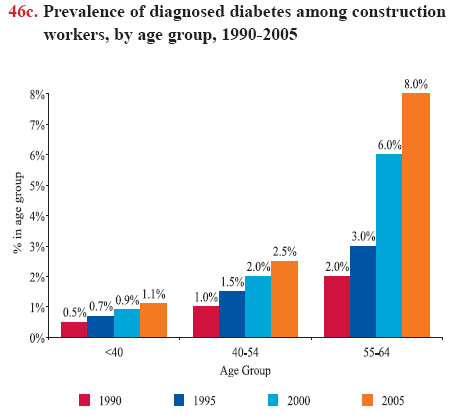 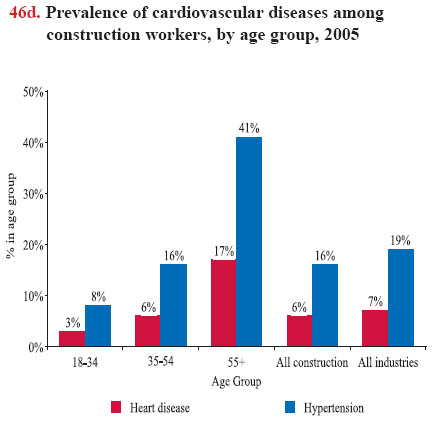 6. CPWR findings from a medical screening program of over 10,000 pulmonary function tests and chest X-rays of current and former construction workers at Department of Energy nuclear weapons facilities 1996-2006, updated through 2007 (unpublished data).