Section 7: The Diversity of Ownership of Construction and All Companies

Unlike other Economic Census products, the SBO is conducted on a company or firm basis rather than an establishment basis (see Glossary). A company or firm is a business consisting of one or more domestic establishments under the ownership or control of the reporting firm at the end of 2002. The Census Bureau obtains electronic files from the Internal Revenue Service (IRS) for all companies, and the IRS provides certain identification, classification, and measurement data for businesses filing those forms. The SBO covers both firms with paid employees and firms with no paid employees (or nonemployer). Because firms with no paid employees are omitted from many of the Economic Census reports, data on this page are not directly comparable with data on other pages using different Economic Census reports.

The SBO defines business ownership as having 51 percent or more of the stock or equity in the business, and is categorized by gender, ethnicity, and race. The survey has five categories for reporting race: American Indian and Alaska Native, Asian, black or African American, Native Hawaiian and Other Pacific Islander, and white. Hispanic or Latino origin, composed of Mexican, Puerto Rican, Cuban, and Other Spanish/Hispanic/Latino, may be of any race. The survey asks business owners to provide the percentage of ownership for the primary owner(s) and their Spanish/Hispanic/Latino origin, and to indicate the owner's race by selecting one or more of the five race categories listed above. The 2002 SBO was the first Economic Census in which each owner could self-identify with more than one racial group, so a business may be classified and tabulated under more than one racial category. For example, a firm responding as both American Indian and black majority owned would be included in the detailed American Indian and black estimates. As a result, the detail may not add to the total or subgroup total, but would only be counted once toward the higher level all firms' estimates.

Hispanics owned 1.6 million companies in all industries in 2002. The number of Hispanic-owned businesses grew 31% between 1997 and 2002, three times the national average growth for all businesses. Hispanics owned 212,502 construction companies, producing $31.4 billion in business revenues, which accounted for 7.6% of companies and 2.4% of business revenues in construction (chart 7b). The low proportion of revenues per Hispanic-owned company suggests that these companies are relatively small compared with all companies on average.

Other minority groups, including Asian, American Indian and Alaska Native, and Native Hawaiian and Other Pacific Islander, owned 73,893 construction companies with $16.7 billion in business revenues, lower than the proportions for all industries (chart 7d).

The 2002 SBO was the first Economic Census survey coded according to the 2002 NAICS. Because of coding differences and several other changes in the survey methodology, the 2002 data are not directly comparable at the industry level to those from previous survey years. 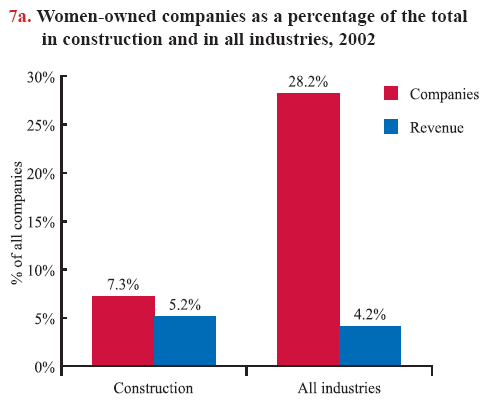 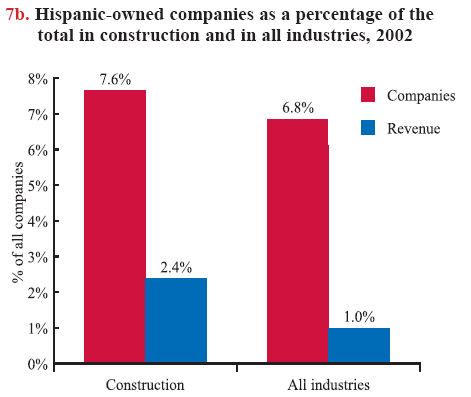 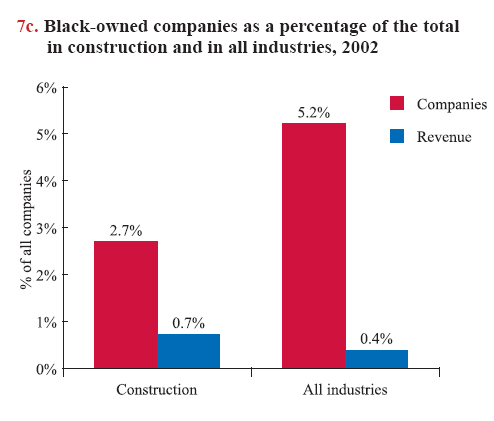 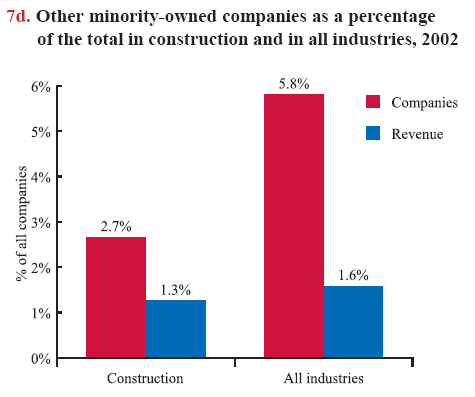 Note:
All charts - Data cover the private sector only.

Chart 7d - "Other minorities" include American Indian and Alaska Native, Asian, and Native Hawaiian and Other Pacific Islander.