The widespread use of portable tools on construction sites, particularly when used with flexible cords, creates the potential for electric shock and even death. This is because cords, cord connectors, receptacles and cord and plug-connected equipment are more vulnerable to damage by activities on the job or just aging, potentially exposing the electric wires. A cord assembly with improperly connected terminals is also a frequent hazard. Wet conditions, including wet clothing, high humidity, standing water, or perspiration increase the risk.

And the risk is high. Even extremely low current can cause death from respiratory paralysis, if the victim is unable to release the "hot" object and the current passes through the chest for an extended time. The most common cause of death from electric shock results from ventricular fibrillation (loss of the heart's ability to pump, which leads to death within minutes). If you are on a scaffold or ladder, any shock can cause you to lose your balance and fall resulting in injury or death.


GFCIs (ground fault circuit interrupter) were developed in 1961 to reduce these hazards, and OSHA requires their use on construction sites for all 120-volt, single-phase, 15 and 20-amp receptacle outlets which are not part of the permanent wiring of the building or structure. GFCI is a fast-acting circuit breaker which senses small imbalances in the circuit caused by current leakage to ground and, in a fraction of a second, shuts off the electricity. It is much more effective than a standard circuit breaker or fuse, which are really designed to protect wiring and equipment not people.

Ground fault circuit protection can be part of a circuit breaker or built within a receptacle. The circuit breaker protects the entire circuit while receptacles can be wired to protect only the individual device and/or to also protect the receptacles on the load side of the GFCI device. Providing more GFCIs or shorter circuits can prevent tripping caused by the cumulative leakage from several tools or by leakage's from extremely long circuits. It is also a good practice to limit exposure of connectors and tools to excessive moisture by using watertight or sealable connectors. Portable GFCIs are also available - use them while waiting for your employer to comply with OSHA standards. 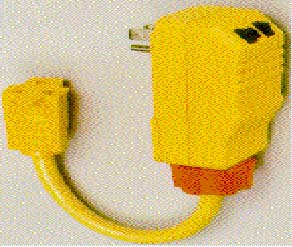 A portable GFCI you can keep with you

OSHA regulations allow employers on construction sites to maintain an "extensive assured equipment grounding conductor program," including daily inspections and periodic testing by one or more competent persons, as an alternative to the use of GFCI. But because it is impractical to meet all the requirements of a grounding program, GFCI protection is easier and better.

Over four hundred workers die each year from contact with electrical energy, the fifth leading cause of workplace death. Construction workers, including laborers, electricians, painters and others account for almost half the total. Direct or indirect contact with power lines is the most common cause of electrocution.