A review of the hazards of exposure to toxic mold and a guide to their safe abatement/removal (with reference to Canadian regulations).
1999

More and more construction firms are involved in removing toxic moulds from contaminated buildings. As a result, there's an increasing demand for information on toxic moulds. This article explains

Information also covers the obligations of employers and others under Ontario's Occupational Health and Safety Act.

Moulds are microorganisms that produce thousands of tiny particles called spores as part of their reproductive cycle. Mould colonies are usually visible as colourful, woolly growths. They can be virtually any colour ­ red, blue, brown, green, white, or black. When disturbed by air movement or handling, moulds release their spores into the air. Given the right environmental conditions, these spores can go on to form other mould colonies. 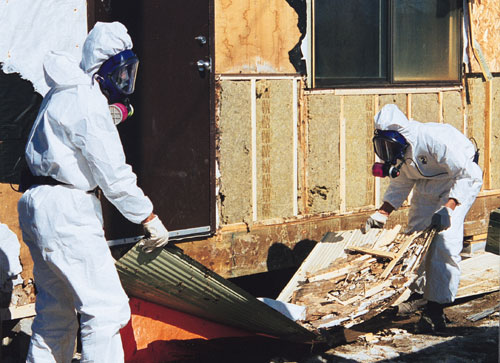 Where are moulds found?

Moulds can be found almost anywhere outdoors and indoors. Indoor moulds usually originate from outside sources such as soil and vegetation. Moulds love dark, moist environments and can grow at room temperature on various construction materials including wallpaper, particleboard, ceiling tiles, drywall, and plywood.

Construction workers can be potentially exposed to toxic spores when working on buildings with some sort of water damage from flooding, plumbing leaks, or leaks in the structure itself.

Why are moulds of concern?

In buildings with water damage or ongoing moisture problems, certain types of "water-loving" moulds may reproduce to higher than normal levels and potentially cause adverse health effects. Stachybotrys chartarum (formerly known as Stachybotrys atra) is of particular concern because it can be found in large colonies and can cause adverse health effects.

Stachybotrys has gained special attention recently because it has been discovered in portable classrooms with ongoing moisture problems. It appears as small black patches and grows well on water-soaked cellulose material such as wallpaper, ceiling tiles, drywall, and insulation containing paper.

In addition to Stachybotrys, construction personnel working in water-damaged buildings may be exposed to other types of toxic moulds such as Fusarium, Aspergillus, and Penicillium.

What health effects can moulds cause?

Air movement and the handling of contaminated material can release toxic spores into the atmosphere. These spores cause adverse health effects by producing toxic substances known as mycotoxins. Once released, toxic spores must come into contact with the skin or be inhaled before symptoms can develop. Not all exposed construction workers will develop symptoms.

How are moulds identified?


Owners of buildings that may be mould-contaminated should conduct, at their own expense, an assessment to determine whether or not the buildings are indeed contaminated. The assessment should include building inspection and analysis of bulk samples.

Mould on visible surfaces may be just the tip of the iceberg. Since they thrive in dark, moist environments, moulds may be hidden from view. Thorough inspections of water-damaged areas must therefore be conducted. This involves looking into wall cavities, behind drywall, under carpets, and above ceiling tiles.

Not all moulds are toxic. The type of mould identified and the extent of the contamination will determine the precautions to be taken.

Bulk sampling and laboratory analysis are used to document the type of mould growing on surfaces. The procedure involves scraping surface material into a sealable plastic bag and sending it by overnight delivery to an accredited laboratory.

An accredited laboratory is one that participates in the American Industrial Hygiene Association's Environmental Microbiology Proficiency Analytical Testing Program. The chosen laboratory should have a competent mycologist (a person that studies moulds) who can analyze the sample and determine whether the mould is likely to pose a health risk.

Based on the presence of visible mould, evidence of water damage, and symptoms that are consistent with allergic or toxic response to mould, it may be justified to skip bulk sampling and go straight to remediation (removal).

The person taking bulk samples or performing inspections must be suitably protected for Level 1 work (see table below) and must be careful not to unduly disturb the mould. 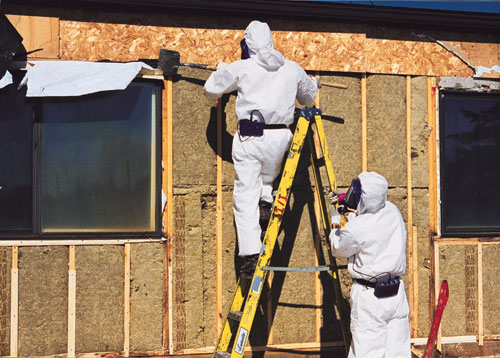 How can moulds be safely removed?

Toxic moulds must be removed. However, special control measures must first be implemented to prevent worker exposure and the spread of moulds from the construction area to adjacent areas. This is especially true for Stachybotrys because of its potentially severe health effects.

The extent of contamination governs what remediation measures need to be taken in order to prevent the spread of toxic moulds.

Note: The cause of moisture problems should be corrected before any mould remediation takes place.

A follow-up inspection should be conducted 3-6 months after remediation to ensure that the mould has not returned.

Health Canada and the New York City Department of Health have both produced documents on the assessment, remediation, and management of fungal contamination. The table below summarizes their recommendations with minor updates to reflect current best practices. The Canada Mortgage and Housing Corporation is developing comprehensive cleanup procedures for toxic mould. The document is still in draft form and not yet publicly available.

Obligations under the Act

Although there are no Ontario regulations specifically addressing moulds, an employer must, under the Occupational Health and Safety Act, take every precaution reasonable in the circumstances for the protection of a worker. Work practices set out by Health Canada in Fungal Contamination of Public Buildings: A Guide to Recognition and Management provide a reasonable standard.

Employers have a duty to instruct workers in the safe removal and handling of mould-contaminated material. Workers in turn have the duty to follow these instructions. Building owners must ensure that trade contractors follow proper remediation procedures.

The following table is intended only as a summary of remediation procedures and is not intended, nor should it be used, as a guideline for mould removal. For that purpose, refer to

Levels of remediation based on the extent of toxic mould contamination