This data brief tracks and measures the reduced Hispanic entry to the construction labor force after the economic downturn.
2009

Published by the CPWR Data Center

The recent economic downturn affected the entire U.S. construction industry. To better understand how Hispanic construction workers have been impacted by the crisis, the CPWR Data Center analyzed current employment data on construction workers. This CPWR Data Brief, the first of its kind, reports the findings concerning this special population group.

This data brief also updates and expands on the employment information on Hispanic construction workers found in CPWR’s The Construction Chart Book. Topics such as fluency in speaking English and current union membership are covered in this data brief.

CPWR has been analyzing large national datasets since the organization’s inception in 1990. Since then, the CPWR Data Center has studied economic and safety and health issues affecting racial and ethnic groups of construction workers. Particular interest has been paid to Hispanic workers after the National Institute for Occupational Safety and Health (NIOSH) identified Hispanic construction workers as a high-risk or “vulnerable” population group that is rapidly expanding. In the last 10 years, the proportion of workers who identified themselves as Hispanic doubled among all U.S. industries, but more than tripled in construction.

This data brief on Hispanic employment in the construction industry provides insight into this unique and vulnerable population group. 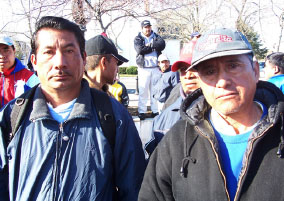 Hispanic employment in construction has experienced considerable growth since 1990, increasing from 705,000 to nearly 3 million in 2007 (Chart 1). These numbers may even be underestimated due to the possibility that sampling techniques may undercount undocumented and immigrant workers that may be of Hispanic origin. With the slump in the construction industry in 2008, the average number of Hispanics employed in this industry dropped almost 300,000 in 2008.

Timeline of the decline

The trend of Hispanic employment in construction has changed from increasing to decreasing for the first time since 1990 (Chart 3).

3. Hispanic emplyees as a percentage of construction and all industries, selected years, 1990-2008

Although the gap in union membership rates between Hispanic and non-Hispanic construction workers remains large, significant gains are being made (Table 1). This is presumably due in part to fewer job losses among Hispanic union members and increases in unionization during the 2008 economic downturn.

*All numbers are shown in thousands.

4. Union membership among Hispanic and non-Hispanic construction workers, 2005 and 2008

Despite the reduction in Hispanic employment, Hispanic workers still play a large role in the U.S. workforce, especially in industries with a high proportion of production or blue-collar occupations. In 2008, Hispanic production workers made up 36% and 30% of the workforce in agriculture and construction respectively, and encompassed 22% of the employees in all industries (Chart 5).

5. Hispanic employees as a percentage of each industry, 2008

6. Percentage of foreign-born workers, by industry, 2008

9. Year of entry into the United States among foreign-born Hispanic construction workers, 2007

10. Percentage of foreign-born Hispanic construction workers and percentage who were not fluent in English, 2007

Hispanic workers are often found to be more geographically concentrated in the South and West. In 2007, more than 40% of the construction workforce was of Hispanic origin in the following states: New Mexico, Texas, California, Arizona, and Nevada; while states with less than 2% of Hispanic workers in construction were: Vermont, West Virginia, South Dakota, Maine, and North Dakota (Chart 11).

11. Percentage of construction workers who are Hispanic by state, 2007

13. Distribution of educational attainmnet in construction, Hispanic and non-Hispanic workers, 2008

16. Hispanic workers as a percentage of selected construction occupation, 2007

17. Average hourly wage in construction among Hispanic and non-Hispanic workers, by union status, 2008

The CPS is a monthly survey of households conducted by the U.S. Census Bureau for the U.S. Bureau of Labor Statistics (BLS). Estimates from the survey are based on a scientific sample of about 60,000 households. Each month, an interviewer contacts a designated household to obtain basic demographic information about everyone living at the address, including age, gender, race, and Hispanic or Latino ethnicity. For those aged 16 years or older, the survey collects detailed information on employment, including occupation, industry, number of hours worked, and earnings.

The ACS is the largest household survey in the United States, with a sample of about 3 million addresses, and is a part of the Decennial Census Program, which takes place every 10 years. The ACS is a new approach designed to provide accurate and timely demographic (e.g., age, gender, race, ethnicity, etc.) and socioeconomic indicators (e.g., education, residence, birthplace, language spoken at home, employment, income, etc.) on an annual basis for both large and small geographic areas within the United States. The ACS will eliminate the need for a long form in the 2010 Census.

Both the CPS and the ACS are household surveys that identify people as Hispanic only if they say they are. Hispanic refers to any person or individual whose origin is Mexican, Puerto Rican, Cuban, South or Central American, Chicano, or other Latin American countries, regardless of the individual’s racial background. Latino is an alternative term for Hispanic in many publications. But this report adopted Hispanic, which is the term used in both the CPS and the ACS.

The estimate of foreign-born construction workers is among workers who were employed when the survey was conducted. Foreign-born is defined as persons who reside in the United States but who were born outside the country, or one of its outlying areas, to parents who were not U.S. citizens. The foreign-born population includes legally admitted immigrants, refugees, temporary residents such as students and temporary workers, and undocumented immigrants. The survey data, however, do not separately identify the number of persons in these categories.

The CPWR Data Center would like to thank Pete Stafford, Jim Platner, and Don Ellenberger for their review of this report. Vince Yan, an intern in the CPWR Data Center, assisted in data manipulation and preparation of charts.

About the CPWR Data Center

The CPWR Data Center is part of CPWR—The Center for Construction Research and Training. CPWR is a 501(c)(3) nonprofit research and training institution created by the Building and Construction Trades Department (BCTD), AFL-CIO, and serves as the research arm of the BCTD. CPWR has focused on construction safety and health research since 1990. This study on Hispanic employment in construction is part of our ongoing surveillance activities on vulnerable populations in the construction industry.

Research for this report was funded by CPWR using grant U54 OH008307 from the National Institute for Occupational Safety and Health (NIOSH). The contents are solely the responsibility of the authors and do not necessarily represent the official views of NIOSH.