An announcement that former construction and maintenance workers from the U.S. Department of Energy (DOE) Hanford, Washington, nuclear facility are being interviewed about possible work-related health problems.
May 1998

After a year of planning, medical screenings (exams) were to begin in clinics near Han-ford May 15 and continue for 4 years.

"This program will provide aid to our members who worked at Hanford; it will help them to understand their health situation and, hopefully, allay concerns they may have," Bob Dilger told the kickoff crowd in Pasco. Dilger is executive secretary of the Washington State Building and Construction Trades Council (BCTC).

"More than 109,000 building trades workers have worked at Hanford since it opened," added Richard Berglund, president of the Central Washington BCTC. "We expect that 30,000 will participate."

DOE funds the program, including all costs of the first health screening for each participant. The program is run by five health organizations and coordinated by CPWR – Center for Construction Research and Training. 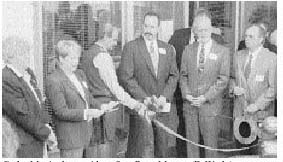 Former workers who live outside the Northwest will be referred to doctors near their homes.