Dr. David Michaels, Assistant Secretary of Labor, has called distracted driving an epidemic and noted that "year after year, the leading cause of worker fatalities is motor vehicle crashes." Now new research reveals that drivers who believe they are better than average at multitasking are more likely to be worse that those who don’t multitask. And the more likely you are to multitask, the more likely you’re bad it.
Jan. 25, 2013 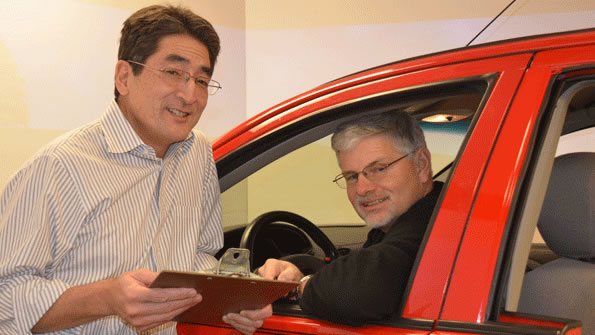 University of Utah psychology professors David Sanbonmatsu, Ph.D. (left), and David Strayer, Ph.D., used this driving simulator in some of their research on cell phone use and driving.
University of Utah

Drivers who believe they are skilled at multitasking – such as taking a phone call while on the road – actually are the least likely to be capable of safely doing so, a new study reveals. In fact, drivers who multitask may be inclined to do so because they have difficult focusing closely on even a single task.

Senior authors David Sanbonmatsu, Ph.D., and David Strayer, Ph.D., both psychology professors at the University of Utah, say their new study suggests drivers should not harbor the illusion that they are better than average at multitasking while driving. Citing humorist Garrison Keillor’s catchphrase about kids in Keillor’s fictitious hometown, Strayer said people who use cell phones while driving “all think they live in Lake Wobegon, where everybody is above average. But it’s a statistical impossibility.”

The study ran 310 undergraduate psychology students through a battery of tests and questionnaires to measure actual multitasking ability, perceived multitasking ability, cell phone use while driving, use of a wide array of electronic media and personality traits such as impulsivity and sensationseeking. Key findings include:

The researchers concluded that the study “appears to further bolster arguments for legislation limiting the use of cell phones while operating a motor vehicle.”

Sanbonmatsu and Strayer conducted the study with University of Utah co-authors Jason Watson, an associate professor of psychology, and Nathan Medeiros-Ward, a doctoral student in psychology. The study was funded by the American Automobile Association Foundation for Traffic Safety and was published Jan. 23 in PLOS ONE, an online journal of the Public Library of Science.