Following an extensive review of commercially available portable local exhaust systems (LEVs) for welding fume, the Welding Partnership for Advancing Control Technologies in Construction (PACT) used a rating procedure to select which LEV systems should be tested for exposure control effectiveness and usability. This report tested the Trion Airboss OneMan portable LEV in a "laboratory-like setting." The results provided strong evidence that the tested system, "provided substantial reductions in Cr VI exposures when stainless steel welding. These data therefore support the use of this LEV system on construction jobs where stainless steel welding is being conducted." The reduction in manganese exposures with use of the tested system was less substantial. Given the lack of statistical significance between the means measured with and without LEV, these results provide weak evidence of manganese reduction with the tested system.
March 1, 2013

This work is being carried out as part of a four year CPWR research project which has as one of its aims to test the efficacy and effectiveness of commercially available local exhaust ventilation (LEV) for welding fumes. The project, called AIMS (Adoption of Innovations to Minimize Fumes and Dusts in Construction), uses an industry partnership in the selection of LEV systems to be evaluated and to promote use LEV for welding fumes in the construction industry. Following an extensive review of commercially available portable LEV systems for welding fume conducted by Dr. John Meeker, ScD, CIH, the Welding Partnership for Advancing Control Technologies in Construction (PACT) met on June 8, 2012 and discussed the characteristics of LEV systems they believed were most important for acceptance and adoption on a typical on job site., Dr. Meeker, presented the results of his search to the PACT which subsequently used a rating procedure to select which LEV systems should be tested for exposure control effectiveness and usability. The highest rated unit was selected for evaluation in a “controlled” or “laboratory-like” setting to be followed by testing in a real field setting. This report describes the outcome of the first LEV system evaluation conducted in a “laboratory-like” setting.

The Trion AirBoss One-Man Portable LEV system received the highest rating by the PACT and was therefore selected as the first LEV system to be evaluated.

According to the distributor website, it offers the following features: 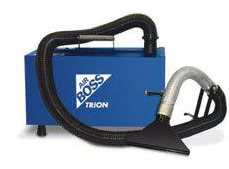 The Airboss One-Man Portable retails for $1200. However after describing our study to the vendor (Air Purifiers, Inc., Rockaway, NJ), we were able to purchase the system for $600. The system was equipped with a triangular “Fish tail” hood. However, due to our previous experience with similar “high-vac/low-flow” equipment and published hood entry losses (ACGIH, 2004) , a simple “bell-shaped” hood distributed by Lincoln Electric was used to reduce hood entry losses.

Senior level apprentice welders with medical clearance for respirator use performed shielded metal arc welding (SMAW) of both stainless and carbon steels. Personal air monitoring samples were collected with and without LEV to test the ability of the ventilation unit to reduce exposures. Following IRB approved protocol, the welders were provided with consent forms and agreed to participate in the study. They were also provided with a powered, air purifying respirator/welding hood for protection from welding fume exposure during the trials. While we attempted to have the same welder perform all the welding throughout the study to minimize variability introduced from differences in welding techniques between individuals, this was not feasible due to apprentice schedules at the training center. A different worker performed the welding trials on each of the three days.

Control vs. no control trial order was randomized to prevent systematic bias due to carryover exposures from one run to the next and to prevent other potential biases. Carryover exposure was further prevented by allowing ample time between trials. The return of ambient particulate concentration to background level was verified prior to each run using a real-time monitor (HazDust III; Environmental Devices Corp., Plaistow, N.H.). Five no-control and five LEV control trials were run for stainless steel welding, while six no-control and six LEV control trials were run for carbon steel welding. A greater number of trials were possible for carbon steels due to the shorter average duration of the trials.

Welding was conducted in a semi-enclosed booth used for pipe fitter training. The booth consists of three solid walls and a curtain on the fourth wall, which was closed during welding. The booth was equipped with a ventilation system which remained off during the trials to allow measurement of the effectiveness of the portable LEV system exclusively. Small (approximately 6 to 8 inches in length) sections of 6-inch diameter cylindrical steel pipe (“coupons”) were welded together around the circumference of the pipe (18.8 inches).

Stainless steel welding. For stainless steel, repeated “fill” passes were used on AWS 304 (schedule 40) stainless steel pipe coupons. Pipefitter/welders commonly would use GTAW (TIG) welding for a root pass and then “stick out” the remaining filler welds. However, since TIG welding generates much less fume than SMAW and our objective was to keep everything uniform except for use of the tested LEV system, we instructed the welder to only perform SMAW fill passes. Thus, exposure levels measured for the stainless steel trials likely represent a “worst case” scenario when compared to welding operations that also use TIG welding for a root pass. Type 308/308L electrodes (19–21% chromium) were used for all stainless steel trials.

Carbon/mild steel welding. Carbon steel schedule 80 each pipe welds consisted of two passes: a root pass followed by a fill pass. Shielded metal arc welding was used for both the root pass (6010 electrode; 3/32), and the fill pass (7018 electrode; 3/32). Two trials (one with LEV, one without LEV) were run per weld. Trials that included the root pass were equally distributed between no-control and LEV control trials.

Welding position and durations. Both stainless and carbon steel pipe were rotated so welding was typically performed between “9 o'clock” and “12 o'clock” on the circumference of the pipe to allow for optimum positioning of the LEV hood during controlled trials. During LEV-controlled trials, an effort was made to have no more than 4 to 6 inches between the weld and the hood opening.

Static pressure measurements were made at a tap positioned several duct diameters downstream from the hood between each of the LEV-controlled trials to assess potential loss of air flow over time due to filter loading. Finally, detailed notes were recorded regarding the sampling location and conditions, any factors or variables that occur during the runs which may have affected welding time or exposure, as well as any observations related to usability or feasibility of the LEV system.

For stainless steel welding, two separate samples were collected simultaneously for each trial. One sample was analyzed via OSHA method 215 (Hexavalent Chromium), and the other with NIOSH 7300 for nickel and manganese. Note that OSHA ID215 samples were analyzed within 8 days following the method protocol. For carbon steel welding, only one sample was collected each trial and analyzed for total welding fumes, manganese and iron concentrations according to NIOSH Methods 0500 (Particulates Not Otherwise Regulated, Total) and 7300 (Metals in Air).

Descriptive statistics were tabulated for LEV and non-LEV trials. Distributions were assessed for normality and transformed where appropriate. Since data were collected in an experimental setting, we hypothesized that total particulate, manganese, CrVI and other metal exposure levels would follow a normal probability distribution. Differences between exposure levels with and without LEV use were explored using a student’s t-test. In the event an assumption of normality of the data could not be made, the non-parametric equivalent test (Mann-Whitney U-test or Wilcoxon rank-sum test) were utilized. Finally, multivariable linear regression was utilized to assess effectiveness of LEV use when also taking into account effects of day/worker, number of rods/electrodes used, or, for carbon steel welding, whether or not a root pass was included in a particular trial.

We found a statistically significant difference in Cr VI concentrations associated with stainless welding between those measured with and without use of LEV (Table 1). The mean Cr VI level with no LEV was 8-fold greater than the mean measured with LEV (p=0.004). It is important to note that the mean concentration without LEV use (8.8 ug/m3) was greater than the OSHA PEL for an 8-hour time-weighted average (5 ug/m3), while the mean and maximum concentration for trials where LEV was used were lower than the PEL (1.05 and 1.56 ug/m3, respectively). Unlike the differences observed with LEV use for CrVI, mean nickel concentrations were identical between no-control and LEV control trials.

For both stainless steel and carbon steel welding, nearly all samples had manganese concentrations well below the ACGIH TLV (0.2 mg/m3) and the NIOSH REL (1.0 mg/m3). While mean manganese concentrations were higher for the no-control scenario for both types of steel, these differences were not statistically significant. However, it should be noted that for carbon steel welding the maximum concentration for manganese exceeded the TLV in the no-control trials while the maximum concentration for the LEV control trials was well below the TLV. (Table 2).

Using multivariable linear regression models, inclusion of variables such as worker, number of rods used, or, for carbon steel welding, whether or not a root pass was included in a particular trial were explored to determine whether it would strengthen the reduction in exposure levels attributable to LEV use. We found some modest increases in the strength of the impact of LEV use on exposure levels in multivariate models, but LEV use was still not statistically significant for any of the analytes except Cr VI exposure measured during stainless steel welding (p-value decreased from 0.004 to 0.001 when also accounting for worker).

Estimated LEV flow rates following each LEV trial are appended to this report. Although the LEV system was advertised to provide 220 cfm of airflow, we estimated a flow rate of 136 cfm out of the box. This difference may be due to the lengthy nonlinear duct and addition of a hood to the system. The LEV system maintained a constant air flow for the first two days of sampling. During the fourth LEV control trial for carbon steel welding on day 3, the “filter change” light was illuminated. We estimated a flow rate of 132 cfm following that trial. The airflow continued to decline over the final two LEV control trials, to an estimated flow rate of 120 cfm after the last trial. We did not attempt to pulse or clean the filter in these final trials in order to observe further deterioration in flow rate with continued use, which may have allowed air flow to return nearer to its original rate. It should be noted that the final three LEV control trials had the three highest manganese concentrations among all six LEV trials for carbon steel welding. However, this could have been due to other factors as well (e.g., these three trials also did not include a root pass).

The reduction in manganese exposures with use of the tested system was less substantial. Given the lack of statistical significance between the means measured with and without LEV, these results provide weak evidence of manganese reduction with the tested system. However, for carbon steel welding, the lack of significant differences in manganese concentrations may be due, in part, to the added variability in exposure levels between trials by including different weld types (root and fill pass) or other factors. And, for both carbon and stainless steel welding, the small sample size limited our statistical power.

A test using longer trial durations and a larger number of trials may result in significant reductions in manganese exposure levels with LEV use. The ability of the system to maintain flow rate and other durability and maintenance issues should also be investigated further. A study of the effectiveness of this LEV system on an actual job site is warranted.