Typical dowel drilling machines have one or more drills held parallel in a frame that aligns the drills and holds them steadily during drilling. The dowel drilling machine may be self-propelled or boom mounted, and may ride on the slab or on the subbase. After drilling to a typical depth of 23 cm (9 inches), the anchoring material is placed, and the dowel is partially inserted into the hole. The diameter of the hole is determined by the dowel diameter and whether cement-based grout or an epoxy compound is used to anchor the dowels [FHWA 2006].

Dust is generated during the use of dowel drilling machines and this dust typically contains crystalline silica (Figure 1). NIOSH researchers documented respirable crystalline silica exposures for workers operating dowel drilling machines of up to 26 times the NIOSH REL during full-depth pavement repair and up to eight times the NIOSH REL during new runway construction [Linch 2002, NIOSH 2011c]. 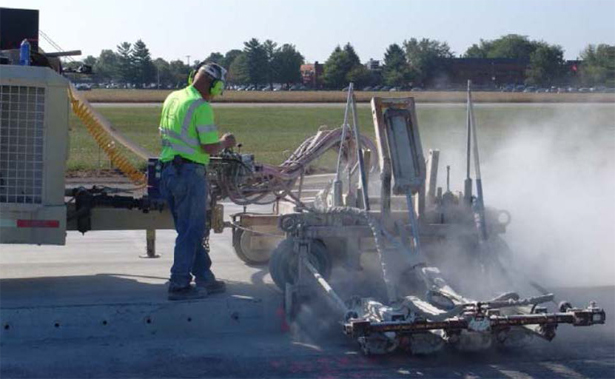 In the first phase of the project, a pilot study was conducted that measured respirable dust emissions from a five-drill dowel drilling machine that was operated in a tent, isolated from the effects of wind, weather, and other particulates. The machine was started remotely and stopped drilling automatically at a preset depth. The pilot study showed that the LEV dust control system reduced dust concentrations by 89% [NIOSH 2008]. Two subsequent studies [NIOSH 2011a, b] were conducted under similar conditions, one with a fourdrill machine and one with a five-drill machine. When the results of those two studies were combined and analyzed, they showed that emissions without the dust control were 14 times greater than when the control was in use. In other words, the dust control reduced respirable dust emissions by 93%.

NIOSH researchers [NIOSH 2013] also investigated whether the greater reductions of dust seen in the first phase of the project compared with those in the second phase were due to the design of the control, its use and maintenance, or operator training. A study was conducted at a training center using a new one-drill machine transported from the factory (Figure 2). A representative of a drill manufacturer instructed apprentice trainers in the use and maintenance of the drill prior to air sampling. The drill-mounted dust control performed well under the conditions of the test, controlling silica exposures to levels below the NIOSH REL when the drill was properly used and maintained by trained operators. 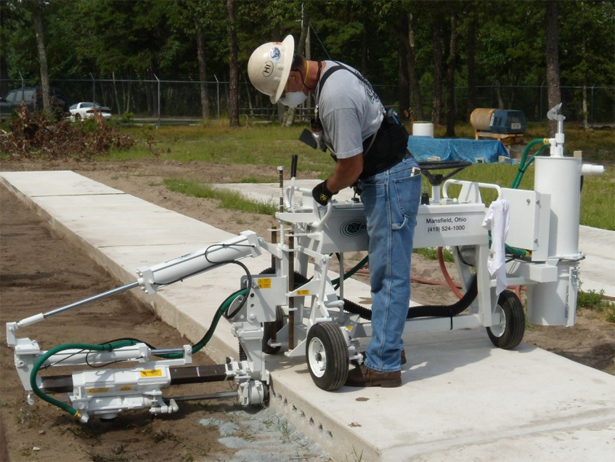 NIOSH identified two manufacturers of dowel drills in the United States. Both manufacturers offer optional dust control systems on their new equipment. Dust controls can also be retrofitted to older model drills. Those dust control systems, like most LEV systems, consist of hoods, ducts, air cleaners, and air movers. The hoods surround the steel and bit at the work surface (Figure 3). They collect the concrete dust produced in an air stream directed toward the hood. Flexible ducts convey the dust and air to the air cleaner. The air cleaner contains a cartridge filter to remove the contaminant from the airstream. The air mover must produce the desired air flow despite losses due to friction, fittings, and hood entry [ACGIH 2010]. Both manufacturers also sell water spray systems to suppress drilling dust. Water spray systems were not evaluated during the NIOSH project.

NIOSH has evaluated LEV dust control measures to reduce worker exposure to hazardous dust during dowel drilling operations and recommends their use [NIOSH 2008, NIOSH 2011a, 2011b, 2011c, NIOSH 2012, NIOSH 2013]. The recommendations below should reduce exposures associated with dowel drilling. 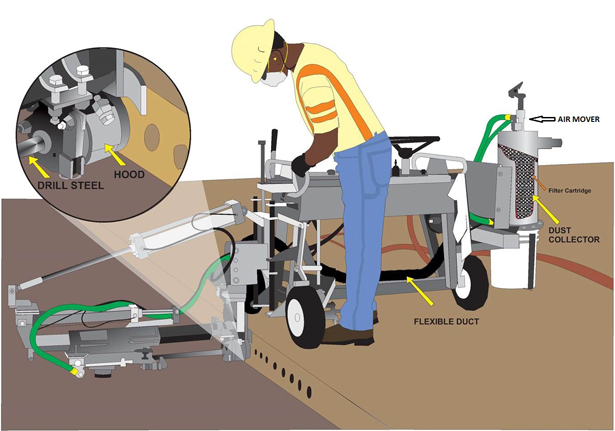 These recommendations are based on good industrial ventilation engineering design practices. NIOSH researchers did not encounter any dowel drill dust controls that incorporated all of these features.   

To receive documents or other information about occupational safety and health topics, contact NIOSH at

For a monthly update on news at NIOSH, subscribe to NIOSH eNews by visiting www.cdc.gov/niosh/eNews.

Mention of any company or product does not constitute endorsement by NIOSH. In addition, citations to websites external to NIOSH do not constitute NIOSH endorsement of the sponsoring organizations or their programs or products. Furthermore, NIOSH is not responsible for the content of these websites.

This document is in the public domain and may be freely copied or reprinted. NIOSH encourages all readers of the Workplace Solutions to make them available to all interested employers and workers.

As part of the Centers for Disease Control and Prevention, NIOSH is the Federal agency responsible for conducting research and making recommendations to prevent work-related illnesses and injuries. All Workplace Solutions are based on research studies that show how worker exposures to hazardous agents or activities can be significantly reduced.