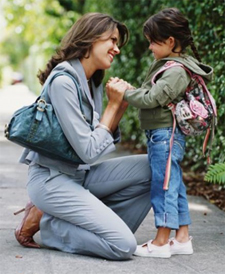 In 1993, the Women’s Bureau conducted the first large-scale, nationally representative survey about working women’s employment challenges and concerns. Since then, economic and social forces have continued to alter the landscape for working women and households have become increasingly reliant on women’s economic contributions.i Additionally, there have been important developments in women’s educational attainment, wage disparity, family structure, and technology .ii In light of these changes, in 2016 the Women’s Bureau conducted the Survey of Working Women to identify the employment challenges today’s working women confront, and to examine how these issues relate to their job and career decisions—in particular, women’s reasons for exiting the labor force.

The survey collected information on work and family situations for 2,713 respondents. Gallup conducted household-based telephone interviews with 1,202 working women over age 18; 499 low-income working women over age 18; 508 women ages 24 to 54 who left the labor force and remained out of the labor force at the time of the survey; and 504 working men over age 18. The survey oversampled low-income women, as they may have challenges and experiences that differ from those of other working women. Men were included as an important comparison group. The survey was weighted to reflect the differential sampling rates of these groups. 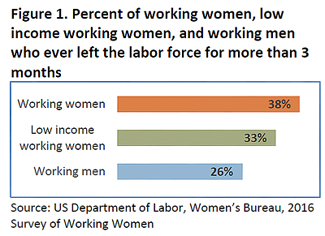 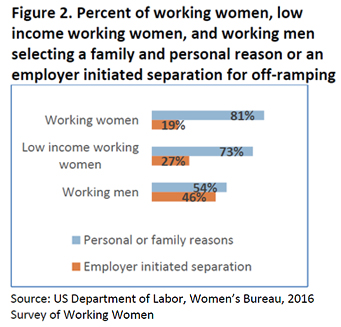 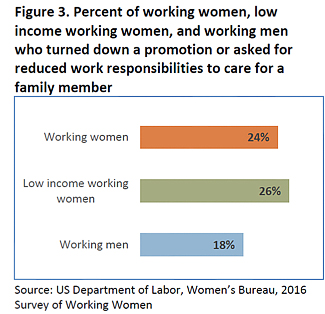 The survey results show that women are more likely than men to leave the labor force. However, temporary labor force exits are common for all groups of workers. One important phenomenon that warrants further study is “off-ramping” (here defined as leaving the labor force for three months or more,1 but eventually returning). Nearly 40 percent of working women off-ramped at some point in their careers, as did about one in four men.

Among survey respondents who off-ramped women for personal or family reasons, women were nearly twice as likely as men to report leaving to care for family members. About 61 percent of women indicated that taking care of a family member was an important reason for their departure, compared with 31 percent of men. In contrast, 55 percent of working men selected a personal medical reason or pursuit of additional education as a reason for off-ramping, compared with 42 percent of women. More than one-third of women who off-ramped to care for a family member cited the cost of childcare as an important reason for leaving the labor force.

Not only are women more likely to leave the labor force to care for family members, they are also more likely to pass up promotions or ask for reduced responsibilities at work. Married mothers of young children are especially likely to pass up promotion opportunities. Married women were nearly twice as likely as single women to turn down a promotion or ask for reduced responsibilities. 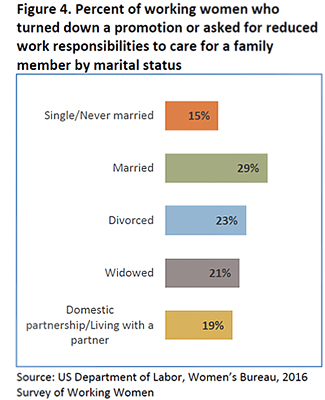 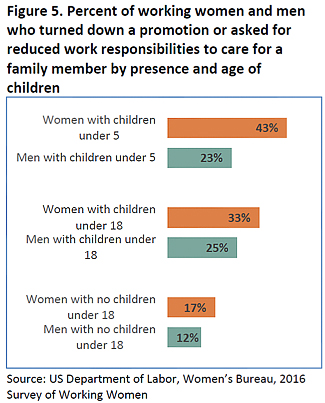 Retaining women at work is an important economic concern. To understand what men and women value in their decision to take a job, the survey asked women to reflect on which job characteristics were important to them in choosing their most recent job. The most important reason cited by all workers was feeling that they would be good at the job. Many also wanted to have a job they felt passionate about. However, work schedule was a more important consideration for women, particularly women with young children. Nearly 4 in 5 stated that the days or hours they were required to work was an important consideration in selecting their most recent job. Mothers of young children were also more likely to cite as important considerations the job’s amount of paid time off and the job’s reputation for being family friendly. Men were more likely to cite a job’s opportunities for advancement and earnings potential as important considerations. 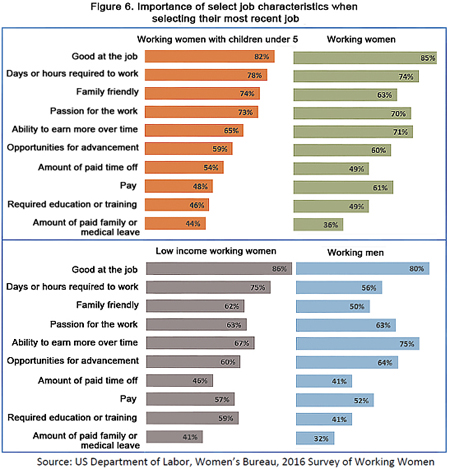 Overall, this survey shows that men and women value being engaged with their work. However, off-ramping remains a common experience among men and women. Women are more likely to exit the labor force for family reasons, while men are more evenly divided in off-ramping for medical or educational reasons and family responsibilities. Having schedules that improve work-life fit and allow for better balancing of work, personal, and family responsibilities is a viable path to increasing the retention of men and women at work, as work schedule was one of the most important factor in job selection for most workers. Over a third of workers also cited availability of paid family and medical leave and paid time off as important qualities they looked for in a job. Provision of childcare and childcare subsidies may also improve retention or enable parents to return to work, as over a third of working women cited the cost of childcare as a reason for off-ramping. This survey provides valuable information to employers and policymakers to design solutions for the common issues facing today’s working families.

The Survey of Working Women provides valuable information to employers and policymakers to design solutions for the common issues facing today’s working families. The survey results help elucidate the issue of workforce off-ramping and the effect of caregiving on careers. But there is much more to research and understand about men and women’s workforce interruptions including the long term financial ramifications to the workers as well the experience of on-ramping back into the labor force.