Describes a McGovern Lever which uses an adjustable see-saw attached to scaffolding to serve as a lift for a drill fastened to a post. This eliminates uncomfortable postures for overhead work. Part of a collection. Click on the 'collection' button to access the other items.

Working overhead contributes to the development of neck and shoulder injuries, especially when using a heavy tool. Besides that, it's difficult to maintain a productive work pace while applying force with both arms raised up to the ceiling. Anyone who has had to sustain any kind of overhead work does not need to be told what the problem is. To be sure, the National Institution for Occupational Safety and Health has said that there is a demonstrated relationship between this kind of work and the development of shoulder tendinitis, or other kinds of nonspecific pains in the shoulder. The more time spent in this posture, the more severe the pain or injury is likely to be.

Mike Joel, Piledrivers Local 56 and Certified Safety Professional, recognized during the project planning of a building refurbishing job that the demand on the workers could lead to trouble. Mike has seen his share of overhead work during years of experience as a safety manager on the Big Dig. When he learned that this latest job would require 19,000 holes to be drilled into a concrete ceiling, he raised the issue at a project planning meeting, challenging planners to reduce the shoulder strain to the workers who would have to do the drilling. The man who responded to the challenge is Jim Byrne, Bricklayer Local 3. On this job, he happened to be the general foreman. "I just rather do something easy than have some guy chasing us around for a week," Jim said about Mike's challenge. Mike was delighted, adding, "Jim's idea is one of the most creative ways of responding to this problem that I've ever seen." So, a simple process of a safety manager recognizing and communicating an ergonomic hazard during planning resulted in a Bright Idea from the general foreman on the floor. After the meeting, Jim went to work, and by the end of the day, Jim had built a prototype.

The solution:...is not over your head!

Jim has an understated response when you ask him about the solution. His responsibility as foreman demands a solution a minute, so it isn't unusual for him to be creative. The McGovern Lever uses an adjustable seesaw attached to scaffolding to serve as a lift for a drill fastened to a post. You press down with your foot, the seesaw lifts the post, thus applying upward pressure for the drill to do its job overhead. With access to a welder, the materials cost about $35, but that's nothing compared to the rate of productivity that his men could maintain and the amount of pain and wear on the men that gets eliminated. The Levers are so well regarded, that it would cost a worker his job if one of them were to disappear. 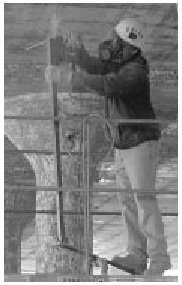 It helps to have a person on site who points out how materials handling or tool handling might put a worker at risk. It helps even more when that person wants to do something about it. This Bright Idea testifies to the safety personnel who had the influence to help reduce risk, and to the workers who had the ingenuity to respond in a simple and effective manner.

We wonder how many more Bright Ideas might be out there that might have come to light in this way. A safe work environment not only includes Bright Ideas on how to reduce physical risk, but it also encourages and allows for workers to put their creative ideas into action. Others have tried the idea pictured at right. Pictured is a Laborer, who has set his drill on a 2x4 shelf across the railing of a personnel lift. The McGovern Lever will give even greater control over the force you apply than you will get by operating the hydraulics of a personnel lift.

A Laborer, Local 223, has found another way to save wear on his shoulder.