This NYCOSH fact sheet is adapted for workers and unions primarily from OSHA’s Legionnaires E-Tool: https://www.osha.gov/dts/osta/otm/legionnaires/. The NYCOSH fact sheet explains how this disease is caused and transmitted, what symptoms are associated with it, which workers are most at risk and what control methods are most effective. Like the OSHA document, this fact sheet reviews the OSHA standards that are applicable for protecting workers from this potentially fatal disease.
August 2015

What is Legionnaires' disease?

Legionnaires’ disease is named after an outbreak of pneumonia that caused 34 deaths at a 1976 American Legion Convention in Philadelphia. There are over 25,000 cases of Legionnaires’ disease each year in the U.S., with more than 4,000 deaths. Most cases are individual cases and are not associated an outbreak (multiple cases at the same location or from the same source). The fatality rate is around 15% - similar to other forms of pneumonia. However, fewer than 5 out of 100 people exposed to LDB-contaminated water develop Legionnaires' disease.

How is Legionnaires’ disease transmitted? 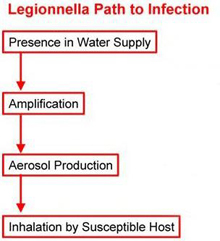 A person can develop Legionnaires' disease by inhaling water mist that is contaminated with elevated levels of LDB. These bacteria are normally present at low concentrations in natural water sources such as lakes and rivers. Low concentrations pose little risk. However, risk increases when certain conditions promote the growth (amplification) of high concentrations of LDB in man-made water transport, distribution, and heating or cooling systems.

Sources of Legionnaires' disease can include almost any warm water system or device that disperses water, particularly as aerosols, sprays, or mists. Devices that can amplify LDB include cooling towers, evaporative condensers, humidifiers, holding tanks, potable water plumbing systems and heaters, and pipes that contain stagnant warm water. Shower heads, faucet aerators, decorative fountains, produce misters, and whirlpool baths can also serve as amplifiers. Conditions that can amplify LDB include water temperatures of 77 to 108°F, stagnant water, scale, sediment, and biofilms in water, and the presence of certain types of amoeba. 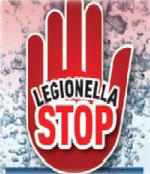 Transmission of Legionnaires’ disease occurs when microscopic airborne droplets of water that contains LDB are inhaled by an at-risk host (a person who lacks immunity or resistance). In addition, fluids and particles may accidently enter the respiratory system rather than the digestive system during the swallowing process (aspiration).

Legionnaires disease is not contagious – it cannot be from transmitted from one person to another.

What are the symptoms of Legionnaires' disease?

If infection occurs, disease symptoms usually appear within 2 to 10 days. Early symptoms can include low fever, headache, aching joints and muscles, fatigue and lack of energy, and loss of appetite. Later symptoms include high fever (102° to 105° F), cough (dry at first, later producing phlegm), difficulty breathing, chills, chest pain, and gastrointestinal symptoms such as vomiting, diarrhea, nausea, and abdominal pain. Around 5 per cent of people exposed to LDB will become infected and develop Legionnaires’ disease.

What are the symptoms of Pontiac fever?

Pontiac fever can be caused by exposure to non-viable (dead) LDB. Unlike Legionnaires’ disease, it is not a form of pneumonia. The incubation period (the time span from infection to appearance of symptoms) is 1 to 3 days. Symptoms may include fever, headache, tiredness, loss of appetite, muscle and joint pain, chills, nausea, and a dry cough. Full recovery usually occurs in 2 to 5 days without medical intervention. There have been no known fatalities.

Who is most at risk of health harm?

Legionnaires' disease is an "opportunistic" disease that usually attacks individuals with underlying illnesses or conditions. At risk individuals include those with respiratory disease, diabetes, cancer, weakened immune systems, as well as dialysis patients, organ transplant patients, the elderly, and heavy smokers or drinkers. However, healthy individuals can also contract the disease.

Which workers are most at risk of exposure?

Certain groups of workers are at increased risk of exposure to LDB, including workers who maintain, clean, decontaminate, or work in close proximity to water systems and system components such as cooling towers, evaporative condensers, humidifiers, potable water heaters and holding tanks, and pipes that may contain stagnant warm water.

How is Legionnaires’ disease diagnosed?

Legionnaires' disease is difficult to diagnose because the pneumonia caused by LDB is similar to other forms of pneumonia. Diagnosis consists of both a chest X-ray to confirm pneumonia and a laboratory test to confirm legionella bacteria in sputum, lung tissue collected by biopsy, blood, or urine.

How is Legionnaires’ disease treated?

What infection control measures are effective? 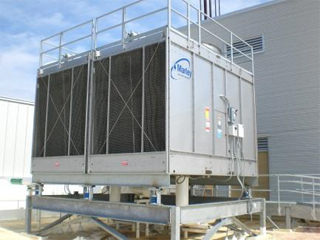 The best method of prevention is to eliminate water conditions that allow bacteria to grow to high levels. The primary sources of LDB-contaminated water in commercial, industrial, and large residential facilities are water-cooled heat transfer systems such as cooling towers or fluid coolers, and warm water sources such as domestic hot-water systems.

Steps to prevent the growth of LDB include: 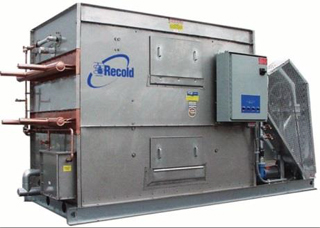 Steps to prevent aerosolization (generation of airborne droplets that may contain LDB) include:

Note that most routine water system treatments are not designed to control LDB.

How should a possible outbreak be investigated?

The federal Occupational Safety and Health Administration (OSHA) recommends that a level-one investigation be started when workplace water sources are suspected to be contaminated with Legionella and when a single case of Legionnaires' disease exists. A level-two investigation should be conducted when more than one possible case of Legionnaires' disease has occurred at a facility.

If two or more cases (level two) have occurred at a work site, it is assumed that an outbreak has occurred. If evidence indicates that the outbreak is still in progress (at least one case has occurred in the last 30 days), OSHA recommends “prompt action to protect employees and to eliminate the hazard.”

An outbreak is determined by the occurrence of cases of disease, not solely by the presence of LDB in water systems.

What infection control measures are effective during an outbreak? 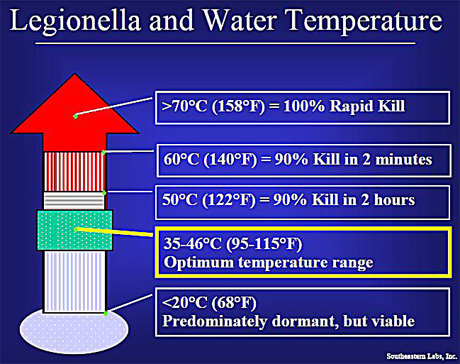 If a water system is contaminated or suspected of being contaminated, special cleaning procedures can eliminate Legionella from water sources. These procedures often involve:

In most situations, evacuation of the building is not necessary. However, if an outbreak is confirmed, individuals who are at high risk of contracting the disease should be isolated from all potential sources of infection.

OSHA recommends that, if there is more than one probable or confirmed case of disease in the work place (level two), the employer should provide:

(In depth information on outbreak investigation and control methods is beyond the scope of this fact sheet. For more information, see OSHA Technical Manual. Section III: Chapter 7. Legionnaires’ Disease. https://www.osha.gov/dts/osta/otm/otm_iii/otm_iii_7.html.)

How should cleaning and decontamination workers be protected? 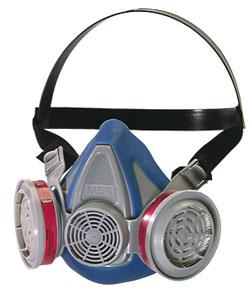 There are no OSHA permissible exposure limits (PELs) for exposure to biological agents such as LDB. Therefore there are no specific, applicable respirator requirements for water system cleaning and decon. However, OSHA requires its own inspectors to wear at least a half-face elastomeric respirator equipped with replaceable HEPA cartridges “during the examination of water systems if a significant potential exists for exposure to high concentrations of contaminated aerosols.”

NYCOSH recommends that during an outbreak, cleaning and decon workers also wear at least a half-face elastomeric respirator equipped with replaceable HEPA cartridges, especially if high-pressure steam, water, or air is applied to remove deposits. During decon procedures, workers should also wear rubber gloves, goggles, and protective clothing to shield against the chemicals used for decontamination. Air intake ducts should be closed during cleaning if they are within 100 feet of a cooling tower being decontaminated. If humidifiers, drain pans, cooling coils, wet duct work, nebulizers, showers, or other indoor equipment are to be decontaminated, measures should be implemented to minimize and contain aerosols.

How should maintenance workers be protected?

Workers performing routine maintenance on or in cooling towers and other water system components may need respiratory protection and other personal protective equipment (PPE) due to the possibility of exposure to chemicals used in recirculated water. Selection of respirators and other PPE will depend on the chemicals used and the work tasks performed.

How should other workers be protected?

Individuals routinely working near but not on or in cooling towers do not normally need to wear protective equipment.

The OSHA Personal Protective Equipment/General Requirements Standard (29 CFR 1910.132) requires the employer to conduct a job hazard assessment to determine whether hazards are present that require the use of PPE. If PPE is required, the employer must provide it at no cost. The employer must train employees who are required to use PPE. Training must cover when and where to use PPE, how to use PPE, the limitations of relying on PPE, and how to maintain and dispose of PPE.

The OSHA Respiratory Protection Standard (29 CFR 1910.134) requires the employer to implement a written respiratory protection program where respirators are required to protect worker health. The employer must medically evaluate and annually train and fit-test workers who will use respirators.

The OSHA Hazard Communication Standard (29 CFR 1910.1200) requires the employer to identify and label hazardous chemicals in the workplace, to implement a written hazard communication program, to provide access to safety data sheets, and to train workers on chemical hazards and safety measures.

These requirements protect all workers, including undocumented workers.

Do cases of Legionnaires’ disease have to be reported?

The New York City Department of Health and Mental Hygiene requires that all cases of Legionnaires’ disease be reported to the department.