OSHA powerpoint describes the industrial hygiene findings in a fatality investigation. The fatality occurred in a newly constructed manhole from the displacement of oxygen by carbon dioxide from limestone rock in an area with acidic topsoil. Acid leaches from soil, which then contacts the limestone (calcium carbonate) producing carbon dioxide. A vacuum drawn on the manhole while testing during the construction process resulted in displacement of oxygen with carbon dioxide.

Reason For the Intervention

The inspection was initiated after our office received notification of a construction site fatality from the employer on August 5, 2004, which was a day after the incident. The report was that the employee was found at the bottom of a newly constructed manhole. The employer was a small construction company with a total of 20 employees. The company installs water and sewer lines, with a SIC Code of 1623. 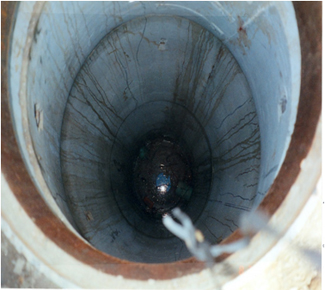 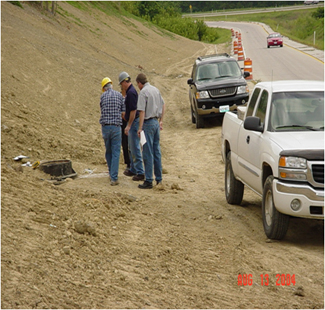 The employer was laying sewer pipe and manholes for a new housing development. There were 6 employees on site the day of the incident - five of the employees were laying pipe over the hill from the manhole that was involved in the incident. One employee (the victim) was grouting the manhole. This photo shows the manhole from top of the hill looking down. The area was previously farm land, it was slightly hilly, and the manhole was placed in the terrain with a slope of 1 to 4. The manhole was adjacent to entrance ramps to a highway. 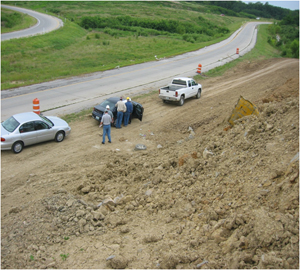 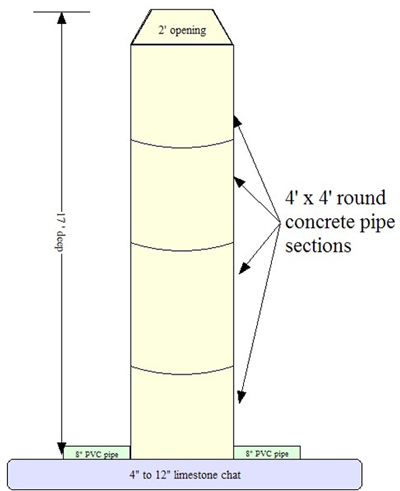 There were 4 sections with a total height of approximately 17 feet when measured on the outside (per drawings), and the inside measurement was 16 ½ feet (when measured with a trench pole). All of the sections were made of concrete and were coated with a water proofing substance. Ladder rungs were present in the interior surface. There was a 2 foot opening at the top, and 4 foot wide internal diameter. The manhole was set in a bed of gravel any where from 4 to 12 inches. Two eight inch plastic sewer pipe enters and exits the manhole near the bottom. At the time of the incident and the inspection activity, the inlets were plugged.

As stated earlier, there were 6 employees on site the day of the accident. 5 of the employees were working over the hill laying sewer pipe. The victim was assigned the job of grouting. Each manhole, per city codes, must pass a leak test, which is accomplished by pulling a vacuum and the manhole must hold a vacuum of 10 inches of mercury for a set time based on the depth of the manhole. This slide shows the vacuum test equipment. The upper photo shows the apparatus which seals the top of the manhole and the vacuum pump. The lower photo shows the plug inserts which are placed in the sewer pipe entering the bottom of the manhole and completes the sealed space. If this test fails, as in this case, someone has to grout the seams of the manhole sections. 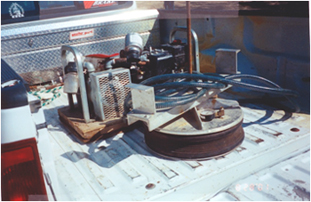 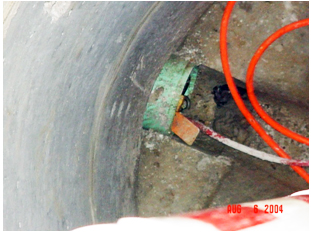 After vacuum test failure, the employee reportedly was assigned the grouting task. Grouting is often done by hand inside the manhole and it was reported that it takes about 1 hour to complete. In this case, the employee was working alone in the manhole; and there was conflicting information as to when the last vacuum test was performed. The employee was found unconscious at the bottom of the manhole. The photo shows what OSHA found during the OSHA investigation—grout bucket and the orange hose connected to the plug inserts at the bottom of the manhole. The plug inserts were still under pressure. 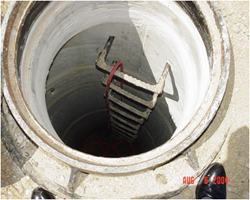 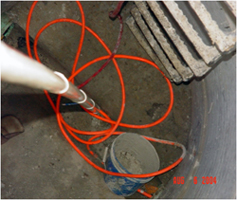 After recovery, the medical examiner requested air sampling of the manhole. The Kansas City, Missouri Fire Department-Hazardous Materials (Haz Mat) Division arrived on site about 3 hours after recovery to perform the air sampling with direct read multi-gas instruments. Results were recorded with two direct read instruments. The oxygen levels were reported at 16.3 and 17%. And LEL levels at 0.0 and 4.5% and Chlorine levels at 4 PPM. There were no detections for carbon monoxide or hydrogen sulfide. No readings were taken for carbon dioxide. 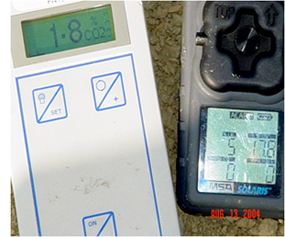 During the inspection, it was reported that the employer did not have a confined space entry program and no equipment available. Our office requested the assistance from OSHA’s Salt Lake City Technical Centers Health Response Team who had assisted similar cases. They arrived on the site about 9 days after the accident. The manhole had not been disturbed other than the placement of the manhole lid. The plug inserts were still in place and were under pressure. Air sampling was accomplished through direct read instruments including one for carbon dioxide levels and a multi-gas instrument for oxygen and LEL. The levels obtained that day revealed 16.0 to 18.2 % oxygen; 1.8 to 3.5 % or 18,000 to 35,000 PPM for carbon dioxide; and 5 to 8 % LEL.

In addition, the Health response Team collected grab or bulk air samples which were sent to the lab for analyses. The samples were collected in aluminum bags with a medium flow sampling pump, as seen in this photo, and set at 3 liters per minute. There were four samples collected from the bottom of the manhole and one control sample which was taken outside of the manhole. The results produced the ranges of 12.5 to 14.1 % oxygen; and roughly 17,000 to 24,000 PPM (16,845 to 23,968 PPM) Carbon Dioxide; and 776 to 1372 PPM Methane. The control sample revealed 19.8 % oxygen and 349 PPM for Carbon Dioxide. These results were comparable to the direct readings that were obtained by the fire department. Another interesting note, was that during this sampling the owner of the company was on site and had borrowed a multi-gas instrument and was inserting the instrument into the manhole along side of OSHA’s equipment. The alarm would go off when the oxygen level was below the set level of that instrument which is usually at 19.5% or slightly higher. 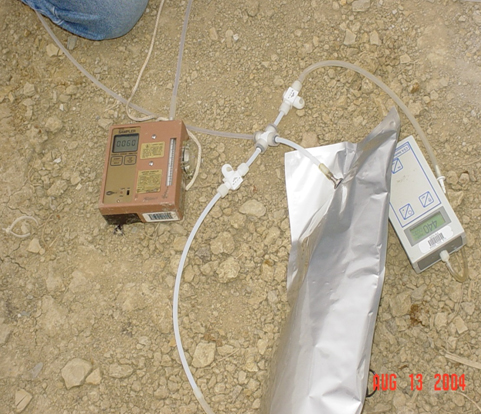 In theory, what happens in these newly constructed manholes is the displacement of oxygen with other substances including carbon dioxide. Carbon dioxide is a colorless and odorless gas and it is heavier than air. In the midwest area, we have limestone rock and/or the manholes are constructed with a bed of limestone rock/gravel and there is acidic soil. It is believed that the acid leachs from the soil and combines with the limestone rock producing carbon dioxide. There were 5 known cases involving fatalities in newly constructed manholes nation-wide since the year 2000, with 4 fatalities in the Kansas City Area. In most of these cases, the manholes were not connected to the active sewer (as in this case) and the vacuum test for leaks had been performed prior to the entry. It is believed that carbon dioxide is pulled into the manhole displacing the oxygen during these leak tests. The oxygen content in these manholes has been found to be as low as 3%. In most of the cases, it was reported that the employers have been entering the manholes for years without any problems; and manholes in the same areas had normal levels of oxygen and carbon dioxide.

19.5% oxygen is the minimal acceptable oxygen level per definitions used by OSHA, such as that used in the permit-required confined space standard in general industy. As the oxygen levels decrease and depending on the work activity and the individual consumption, it becomes more difficult to support body functions.