Whenever you work with power tools or on electrical circuits there is a risk of electrical hazards, especially electrical shock. Anyone can be exposed to these hazards at home or at work. Workers are exposed to more hazards because job sites can be cluttered with tools and materials, fast-paced, and open to the weather. Risk is also higher at work because many jobs involve electric power tools.

Electrical trades workers must pay special attention to electrical hazards because they work on electrical circuits. Coming in contact with an electrical voltage can cause current to flow through the body, resulting in electrical shock and burns. Serious injury or even death may occur. As a source of energy, electricity is used without much thought about the hazards it can cause. Because electricity is a familiar part of our lives, it often is not treated with enough caution. As a result, an average of one worker is electrocuted on the job every day of every year! Electrocution is the third leading cause of work-related deaths among 16- and 17-year-olds, after motor vehicle deaths and workplace homicide. Electrocution is the cause of 12% of all workplace deaths among young workers.1 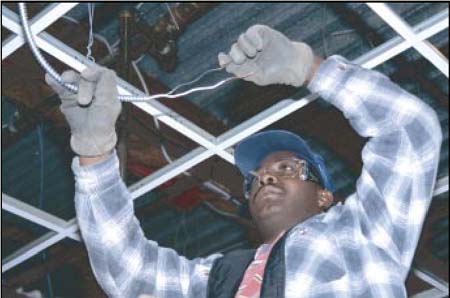 Electrical work can be deadly if not done safely.

This manual will present many topics. There are four main types of electrical injuries: electrocution (death due to electrical shock), electrical shock, burns, and falls. The dangers of electricity, electrical shock, and the resulting injuries will be discussed. The various electrical hazards will be described. You will learn about the Safety Model, an important tool for recognizing, evaluating, and controlling hazards. Important definitions and notes are shown in the margins. Practices that will help keep you safe and free of injury are emphasized. To give you an idea of the hazards caused by electricity, case studies about real-life deaths will be described.

How Is an Electrical Shock Received?

In most household wiring, the black wires and the red wires are at 120 volts. The white wires are at 0 volts because they are connected to ground. The connection to ground is often through a conducting ground rod driven into the earth. The connection can also be made through a buried metal water pipe. If you come in contact with an energized black wire—and you are also in contact with the neutral white wire—current will pass through your body. You will receive an electrical shock.

Your risk of receiving a shock is greater if you stand in a puddle of water. But you don't even have to be standing in water to be at risk. Wet clothing, high humidity, and perspiration also increase your chances of being electrocuted. Of course, there is always a chance of electrocution, even in dry conditions.

You can even receive a shock when you are not in contact with an electrical ground. Contact with both live wires of a 240-volt cable will deliver a shock. (This type of shock can occur because one live wire may be at +120 volts while the other is at -120 volts during an alternating current cycle—a difference of 240 volts.). You can also receive a shock from electrical components that are not grounded properly. Even contact with another person who is receiving an electrical shock may cause you to be shocked.