Discusses new regulations in North Carolina designed to protect workers from falls and other hazards when working on communication towers.

In 2000, the N.C. Department of Labor began state-specific rulemaking regarding communication towers after six workers died from tower accidents between 1997 and 1999. Since 1997, ten workers have died in

For a copy of the standards currently in place go to our Web site at: http://www.nclabor.com/osha/etta/state_specific_rules/7f06.pdf.

The country’s first workplace safety rules on communication towers are now in effect in North Carolina.

The Rules Review Commission approved nine safety rules proposed by the state Department of Labor. Seven of the rules became effective May 1, and the two remaining rules must now go to the General Assembly for approval.

North Carolina is the first state to address communication tower safety for an industry that has a worker fatality rate more than 30 times the average for workers in all industries.

“We’ve seen a high number of tower fatalities in North Carolina,” said Kevin Beauregard, assistant director of the NCDOL Occupational Safety and Health Division. “We hope this standard will place an added emphasis on tower safety and keep these workers safe.”

Ten workers have died in North Carolina from falls off communication towers since 1997, including one earlier this year. A majority of injured tower employees—64 percent—were with their employer less than one year. 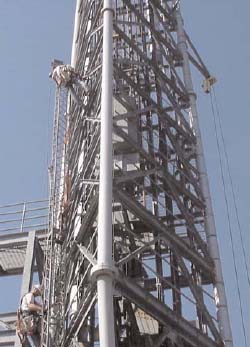 In June, the Department of Labor provided training to safety and health compliance officers on how to enforce the standard. Labor inspectors received one day of classroom training and a day of field training to learn what to look for when doing communication tower inspections. Key components of the standard include hazard assessment, recordkeeping, training, and hoists and gin poles. The currently unapproved sections require 100 percent fall protection and non-ionizing radiation training. The fall protection standard is expected to pass during the 2005 legislative session and the radiation section in 2006.

To help the tower industry comply with the new regulations, the labor department is holding five training sessions at community colleges across the state. A brief history and provisions of the rule will be discussed.

“The training sessions are for tower owners, lessees and employers in the tower industry,” said Ivette Mercado- Bijkersma, who will lead the training. “It is a great opportunity for them to learn how to comply with the new standard.”

Sessions are free of charge. For more information, contact the community college or visit our Web site at http://www.nclabor.com/osha/etta/etta.htm.