Provides data on the nature of events resulting in workers being crushed or hit and discusses steps that can be taken to reduce the incidents.
Autumn, 2000

Over the last decade, one category of fatalities has steadily increased in Ontario construction.

Among the top four killers, "crushed or hit by object or material" now ranks third, after falls and traffic. This type of fatal accident has affected a broad range of trades and activities, as summarized in Table 1. The cases do not include victims struck by vehicles or heavy equipment; those deaths are classified as traffic-related.

This information helps us to recognize potential hazards in the workplace. We can then pay special attention to operations such as demolition, erection, and materials handling.

Once crushed/hit hazards are recognized, they need to be assessed. Assessment determines the seriousness of the hazard by identifying

Controls can be implemented

Control at the worker ­ This is the last resort in protection when hazards can't be controlled at the source or along the path. Control at the worker consists of enclosure, isolation, or personal protective clothing and equipment. Enclosure and isolation would be impractical in most of the situations described in Table 1. Nor would personal protective equipment afford any protection against hazards such as falling beams, collapsing walls, inadequately secured overhead loads, or rock fragments from blasting.

Control along the path ­ Barriers and screens are examples of controls along the hazard path. But they could prevent very few of the fatal accidents listed in Table 1.

Control at the source ­ Ideally the best control for any hazard is elimination at its source. With most crushed/hit hazards, this is the only practical option.

Controls at the source should

Generally these controls depend on 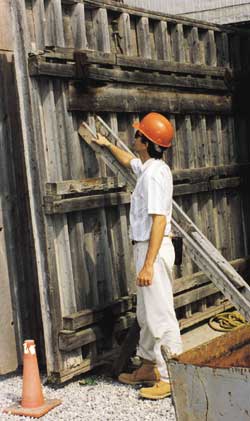 Crushed/hit incidents involve different trades, circumstances, and causes. But it's possible to identify some basic prevention measures. Several of these are required by the construction regulation (O. Reg. 213/91).

When referring to the Occupational Health and Safety Act and Regulations for Construction Projects, make sure you have the latest, revised version, issued in June 2000.