Defective Safway scaffold clamps have been in use at DOE sites. The issue is that they may appear tight, but not actually be tight.
Oct 2004

This Alert provides information on a potential safety concern that may impact operations at Department of Energy (DOE) facilities. It concerns an installation problem with defective scaffold clamps that can lead to catastrophic failure.

This problem was initially identified at the Waste Treatment Plant Project at Hanford concerning scaffold clamps supplied by Safway Services Inc., “Safway”. These clamps may appear to be fully tight (even reaching design torque values), but they are not because of a manufacturing defect. Consequently, the clamp will be loose and subject to failure in use. Safway has been very cooperative in providing technical information used in this Alert. The defect is the presence of burrs on the clamp forks that were not removed in the finish machining of the clamp. These burrs cut into the threads on the bolt, producing false torque. In the Safway product line, these defects have been limited to their Rigid Clamps (part number CRA 19); their swivel clamps (part number CSA 19); and their Half Clamps (part number CSAH 19). Similar clamps from other scaffold suppliers may exhibit the same defect. The clamps may or may not bear an indication of the country of origin.

Scaffold clamps are installed by tightening nuts for bolts built into the clamp, which capture a cap that wraps around the tube. Threads that are damaged or otherwise obstructed (by rust, dirt, paint, etc.) prevent free travel of the nut along the length of the bolt. A higher wrench force is required to tighten bolts with such thread interference, which produces a misleading indication that the bolt is tightly fastened (i.e., false torque).

Normally, applying the full amount of torque for installing the clamp specified by its manufacturer will cause the nut to pass over any degraded thread area and permit workers to securely and safely fasten the clamp. However, some clamps recently distributed in the U.S. have been found to be prone to premature thread damage simply from being fastened to a 1.69 inch (outside diameter) tube. The damage results from the cap, as manufactured, scraping the threads of the bolt when it is being tightened in place. Safway has determined that a batch of clamps distributed in 2004 is prone to thread damage sufficient to generate an amount of false torque equal to that of a fully tightened assembly, even though the clamp may still be too loose. If left undetected, a loose clamp could lead to a scaffold collapse and cause serious personal injury or death. The manufacturer of the affected clamps, Stamperia Prealpi S.R.L. of Italy, working through Safway, is offering to replace them. Safway is notifying each of its customers that may have received these defective clamps, which can be identified as follows:

a) The caps are shaped like a clamshell and bear impression stamps showing the words “SAFWAY” and “ITALY” (See Photo 1.)
b) The undersides of the caps DO NOT have the two indentations shown in Photo 2.

Please be advised that the company that manufactured the clamps for Safway produces identical clamps for other clamp suppliers. Safway has also tested copy-cat, unmarked clamps made in other countries that are prone to the same kind of thread damage.

For proper use and installation for Safway clamps, Tube and Clamp User Safety Guidelines, ORN 402, can be downloaded using the attached link: 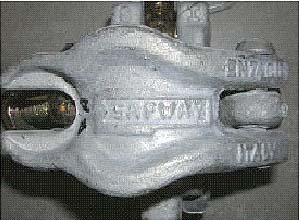 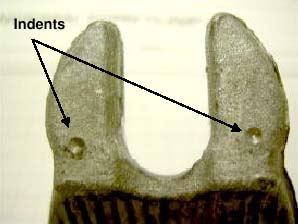 Property damage or serious personnel injury could result from a collapse of scaffolding due to use of defective clamps.

ACTIONS TO BE CONSIDERED

Scaffold clamps similar to those shown in photos 1 and 2 should be inspected to confirm the absence of this defect. Strict adherence to OSHA requirements for scaffold erection should be enforced at all DOE sites. OSHA requires competent scaffold erectors to inspect and evaluate all scaffold components, including clamps, before and during the installation process.

Clamps that cannot be fully tightened for any reason should be scrapped. If any clamp appears to get stuck before it is fully tightened, even though the manufacturer’s specified amount of torque is being applied, it should be taken out of use--regardless of its markings--and the contractor/supplier involved should be promptly notified.

In accordance with DOE Order 231.1A, an occurrence report should be submitted if defective scaffold clamps are identified during inspections. In the notification, please include the date when inspection was conducted, a description of the records maintained to document the inspection, any designator symbols or numbers for the defective clamps, the name of the supplier and manufacturer (if known), and the disposition of the defective clamps.

If you have not encountered problems with defective scaffold clamps, please provide a statement to that effect to Tom Williams, Office of Corporate Performance Assessment (EH-3) by e-mail at thomas.e.williams@eh.doe.gov within 30 days from the date of this alert.

All positive and negative responses received will be evaluated for safety impact on DOE operations.