A 65-year-old male plant manager was killed after a pile of steel beams fell over and crushed him. The incident occurred in the yard of a steel beam processing and distribution warehouse facility in northern NJ. On the day of the incident, the victim was walking between an unsecured, stacked pile of steel beams and a flatbed trailer that was being loaded. As the victim walked between the pile and the trailer, the pile of beams toppled over, pinning him underneath. The victim suffered blunt impact injuries of the head and neck, and was pronounced dead on the scene by paramedics approximately twenty minutes later.
February 5, 2016

A 65-year-old male plant manager was killed after a pile of steel beams fell over and crushed him. The incident occurred in the yard of a steel beam processing and distribution warehouse facility in northern NJ. On the day of the incident, the victim was walking between an unsecured, stacked pile of steel beams and a flatbed trailer that was being loaded. As the victim walked between the pile and the trailer, the pile of beams toppled over, pinning him underneath. The victim suffered blunt impact injuries of the head and neck, and was pronounced dead on the scene by paramedics approximately twenty minutes later

In spring 2014, NJ FACE staff was notified of the death of a 65-year-old male plant manager who was killed after being pinned underneath a fallen stack of steel beams. The incident occurred in a metal warehousing and distribution facility in northern NJ. The victim had worked for this company for over 10 years, and was in charge of safety, payroll, equipment, and plant supervision (including tracking employee performance). The company provided on-site training to the 40 total workers; all crane operators received formal onsite training, but it was not mandatory to be a certified crane operator (the employer has since changed this policy requiring certification for all crane operators). Employees worked 24 hours/day split into three shifts. 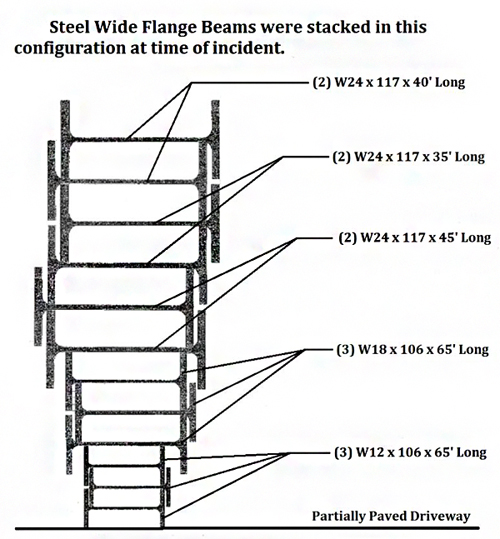 Figure 2. Recreation of the pile before it fell
(courtesy of OSHA).

An NJ FACE investigator received notification from the OSHA Area Office, and conducted an investigation. Additional information was obtained from the medical examiner’s report, death certificate, police report, and the news media.

The incident occurred on a calm, dry, spring day (approximately 32° F at the time of the incident, wind speed up to seven mph), with no significant precipitation recorded. The incident site was located in the yard of the 1,000,000ft2 processing and distribution warehouse (Figure 1). 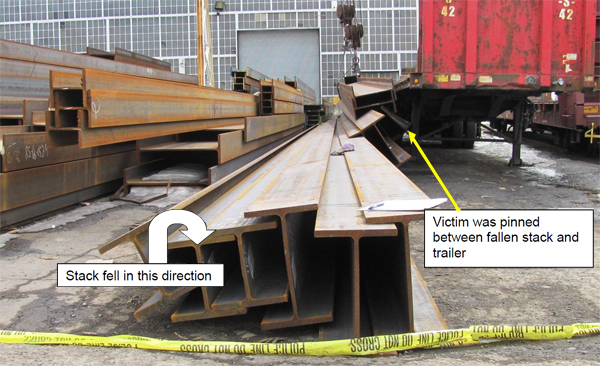 Figure 3. Scene of the incident.

This facility buys bulk quantities of structural steel beams from various steel mills (approximately 90% domestic, 10% foreign mills), and resells the steel in smaller quantities to construction companies. The bulk steel comes to the facility via rail cars or trucks. After the shipments arrive, they are unloaded via a 20-ton overhead gantry crane (Figure 1). Standard practice is to unload the steel in a staging area, where it is then organized and inventoried.

The day before the incident, there was a tractor trailer truck shortage on site resulting in the beams being unloaded onto the ground next to the rail car instead of the stocking location. Due to the truck shortage, the beams on the rail cars were being picked and piled quickly in order to access beams that were needed for an order (called a “hot” order). There was only room for one rail car and one trailer because of the excessive material stacked in the yard. On the day of the incident, the victim went into the yard to give a written order to the worker unloading the rail car for an off rail car “hot” order. Approximately 20 minutes earlier, a pile of six beams was unloaded, presumably for the same reason (a hot order), and piled them on wooden dunnage (dunnage is used to prop up a pile in order to get chains on/off for connection to gantry crane). Figure 2 is a re-creation of this pile. As the victim was walking between the pile of steel beams and a tractor trailer flat bed, the pile toppled over, pinning him underneath (Figure 3). Paramedics were called and the victim was pronounced dead at the scene shortly afterwards. 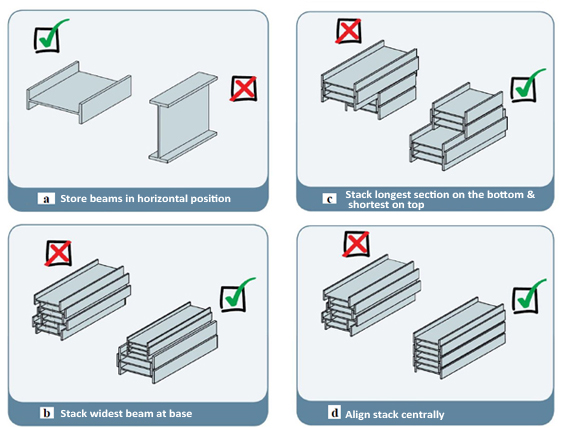 Recommendation #1: Steel beams should be stacked, blocked, interlocked and limited in height to ensure stability.

Discussion: As per 29 CFR 1910.176(b), when storing materials (such as steel beams) in tiers, the materials should be stacked, blocked, interlocked, and limited in height in such a way that the stack is stable.1 With respect to steel beams, this can be accomplished in several ways. Figure 4 illustrates recommended practices for stacking beams; they should be horizontal, with the widest beams at the bottom, shorter beams on top of longer beams. In addition, the stack should be centered; Figure 5 shows a centered stack of steel beams. In this incident, the beams were stacked with the narrowest at the bottom (see Figure 2), and not centered. In addition, NJ FACE recommends the use of steel dunnage rather than wood (Figure 6a-b).

Recommendation # 2: Beams should be moved and stacked by certified crane operator, and stacks should be routinely inspected for stability by a competent person.

Discussion: Only properly trained personnel, that is a certified crane operator, should stack steel beams. In addition, on regularly scheduled intervals, stacks should be inspected by a competent person (a person who is capable of identifying workplace hazards relating to the specific operation and has the authority to correct them3), to ensure they are stacked properly and are secure. This is especially important in the loading and unloading areas, where piles are frequently being moved, added to, or picked from. The competent person who inspects the piles should be properly trained how to do so, and have knowledge regarding materials handling and storage (29 CFR 1910.176(b)).

Recommendation # 3: A safety and health plan based on a job hazard analysis should be developed by the employer and followed where workers are assigned tasks.

Discussion: Employers should conduct a job hazard analysis, with the participation of employees, of all work areas and job tasks. A job hazard analysis should begin by reviewing the work activities for which the employee is responsible and the equipment that is needed. Each task is further examined for mechanical, electrical, chemical, or any other hazard the worker may encounter. In this case, a pre-job evaluation may have prevented the fatality by revealing the hazard inherent in the way the steel beams were stacked. A source of information on conducting a job hazard analysis can be obtained from the US Department of Labor.4 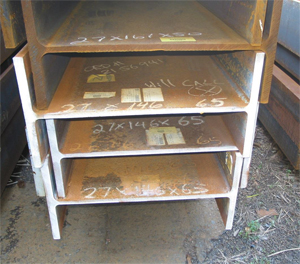 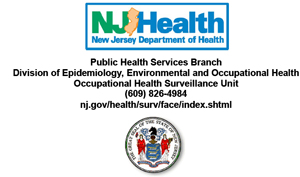