On May 5, 2016, a 29-year-old construction worker employed by a small excavation contractor was killed when the trench he was working in collapsed and buried him in approximately 6 feet of dirt. The worker was part of a crew installing a sewer pipe at a residential property. The trench was 10 feet deep and approximately 3 feet wide in the area where the collapse occurred. The collapse occurred in an unprotected area of the trench, between two pieces of shoring that were spaced 15 feet apart (see Figure 1).

When the trench collapsed, co-workers called 911 and attempted unsuccessfully to locate and dig the worker out. When emergency responders arrived, their first task before commencing rescue and recovery efforts was to shore up the trench to prevent risk of additional collapse and injuries (see Figure 2). Emergency responders spent several hours recovering the worker’s body.

Key factors identified in this investigation included an inadequate trench protective system; no ladder available for entry or egress; and a spoils pile being placed too close to the edge of the trench. Underlying contributing factors were the lack of oversight by a competent person; and insufficient employee training on recognizing and reporting hazards.
April 2019 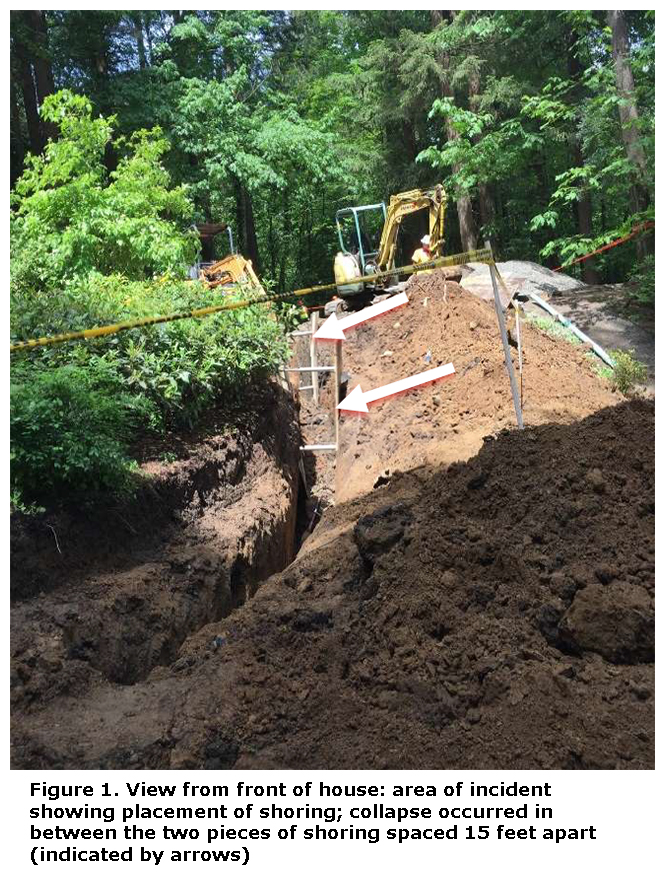 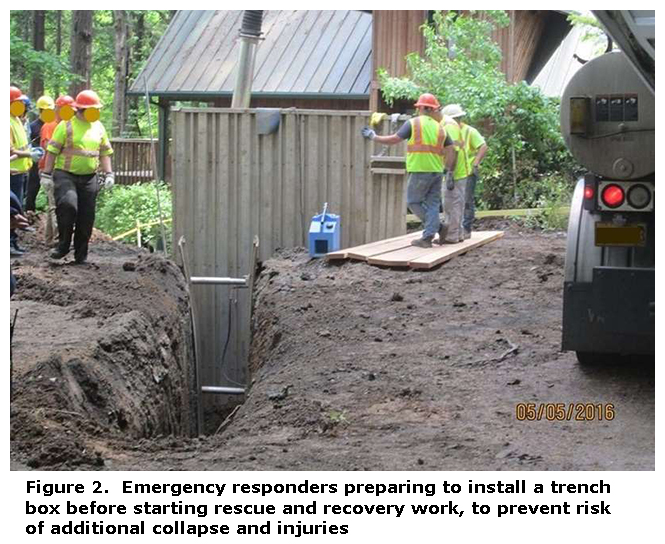 On May 5, 2016, a 29-year-old construction worker died when the wall of the trench he was working in caved in (collapsed) and covered him in approximately 6 feet of dirt. He was part of a crew installing a new sewer pipe at a residential property. OR-FACE received notification of the incident from OR-OSHA. This report is based on review of investigation documents from OR-OSHA and on follow-up discussions with the OR-OSHA investigators and a subject matter expert.

The decedent was employed by a small, residential construction contractor that provided excavation and sewer replacement services. At the time of the incident, the company had been in business for 16 years and had a total of 11 employees. Up to eight employees were working on this site during the project, which included work at the front and at the back of the house. On the day of the incident, two or three employees were working in or around the trench in front of the house, and additional employees were working at the back of the house or in other areas of the property. The construction project involved replacing a 180-foot-long sanitary sewer line at a residential property. It was reported that the expected duration of the project was one week; the incident occurred on the second day of the work. The incident occurred in the trench in front of the house. 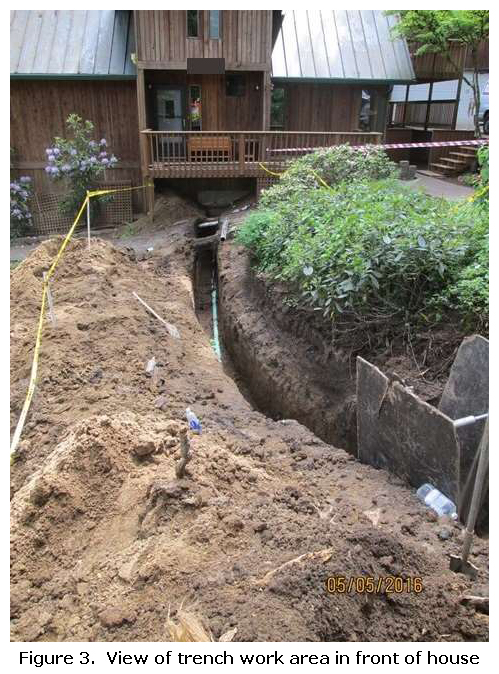 The property was heavily wooded (shown in Figure 1). It was reported that at the time of the incident the excavation was 75 long and 3 feet wide. The trench depth ranged from 5 feet to 13 feet deep along its length. In the work area where the incident occurred, the trench was 10 feet deep. The contractor was using aluminum hydraulic shoring in the trench. Other equipment in use at various times on the jobsite included hand tools, a backhoe, and a dump truck (specific details about makes and models of this equipment are not known).

The trench collapse occurred when decedent was working in an unprotected area of the trench between two pieces of shoring that were spaced 15 feet apart. The specific task being performed by the decedent at the time of the incident is uncertain. It was reported that he may have been checking the grading of the new sewer line. Other evidence suggests he may have been hand digging a high spot of soil or preparing to put in a pipe connector.

The employer, who was the owner of the excavation company, had obtained an appropriate plumbing permit to perform the work for this project. The employer stated in interview remarks that he was familiar with and had experience in proper shoring installation, and that he was the designated competent person for the jobsite.

Trench safety practices used by the contractor at other jobsites are not known. It was reported in OROSHA interview notes that the excavation company held periodic safety meetings but did not document them.

Specific details about the decedent’s tenure with the employer is uncertain. It was reported that he had approximately 6-7 years’ experience in the construction industry, and that most or all of that work experience may have been with this employer. It was reported that he had a good work ethic and worked hard. It is not known what specific training he may have had regarding excavation work, and there was no documentation showing evidence of any safety training for any of the employees. 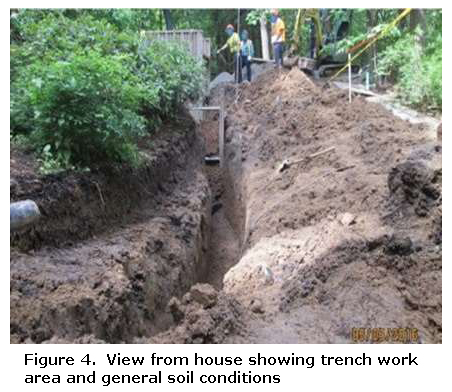 On the day of the incident, the decedent and a co-worker were working in the trench in front of the house (see Figure 3). As shown in the photos, the property was heavily wooded, and soil conditions around the property varied (see Figures 1 through 4). Two pieces of aluminum hydraulic shoring were installed in the trench. The foreman had installed the shoring. Evidence suggests that the foreman was less knowledgeable and experienced than the employer/owner (competent person) in installation of shoring systems. It was also reported that the competent person did not inspect the shoring before work started or during the work shift, as required.

It was also reported that the competent person (company owner) had not performed an assessment of the soils and site conditions prior to starting work. He did not consult the shoring manufacturer’s tabulated data to select appropriate protective systems or refer to the OR-OSHA tables and charts designed for this purpose, nor did he perform a manual or visual test to determine the soil type. OR-OSHA interview records indicated that he had defaulted to Type C soils, which could be considered “worst case” (the least stable type of soil). However, the maximum horizontal spacing for Type C soils is no more than 6 feet and a waler system is required. The two pieces of shoring in the area where the incident occurred were spaced 15 feet apart, and no waler system was in use. The decedent was working between the two pieces of shoring when the trench collapsed and buried him in approximately 6 feet of dirt.

Both the excavation company owner and the foreman were on site at the time of the incident. The foreman was operating a back hoe near the trench. The owner was assisting a dump truck that was backing up. It was reported that the owner and foreman were working approximately 15 to 20 feet from where the decedent was working, within visual sight of the area.

According to interview records, the owner reported he had observed the two employees standing between the shoring, but he did not stop work to take corrective action (as required of the competent person). The owner also reported that he thought he observed the decedent step approximately 18 inches outside of the shoring, when the trench wall collapsed. Subsequent discussion between OR- FACE and OR-OSHA personnel indicated the decedent may have been up to 5 feet away from the shoring at the time of the incident. 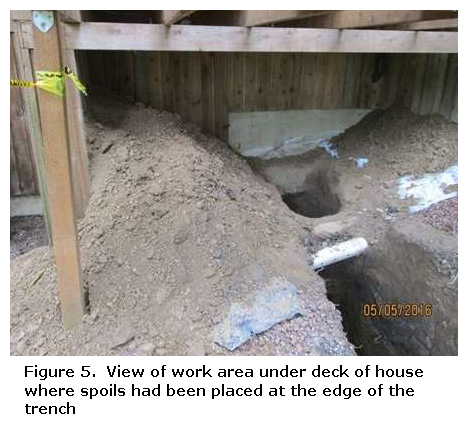 In addition, the OR-OSHA investigation found there was no means of egress, such as ladders, stairways, ramps, or other means, as required for trench excavations that are 4 feet deep or more. It was reported that workers climbed in and out of the trench, by jumping down into the trench at the lowest point to enter, and pulling themselves out at the lowest point to exit the trench. It was also reported that this was not an uncommon practice in this company. It was later determined that no ladder was available on site.

Another hazard identified was the placement of excavated soil (spoils) on the edge of the trench that was located underneath the deck at the front of the house (see Figure 5). The spoils pile in this location was reported to be approximately 2 to 3 feet high. Spoils piles should be placed at least 2 feet from the edge to prevent creating a surcharge (meaning that it places extra pressure on the trench wall and affects trench stability). Alternatively, retaining devices may be used to prevent material from falling into trench.

In addition, while not specifically related to the collapse, the owner was reported to have said they would have been unable to install any form of shoring in the area underneath the deck (shown in Figure 5). Investigation findings suggest that while this may be the case, the contractor could have used alternative, safer practices to reduce cave-in risk in this situation. Examples could include use of boring equipment that could eliminate the need for a worker to enter a hole that cannot be protected with shoring or other protective systems.

CAUSE OF DEATH: Traumatic compression asphyxia.

Recommendation #1: Employers who have employees working in trenches that are 5 feet deep or deeper must select and install appropriate protection systems for the conditions present to protect workers from cave-ins. For trenches less than 5 feet deep, examination by a competent person for potential cave-in indicators is required.

Recommendation #2: Excavation work requires a designated competent person on site who has both the knowledge and authority to identify and promptly correct hazards; this includes daily inspections prior to the start of work and as needed throughout the work shift, and any time site conditions change.

Recommendation #3: To select appropriate trench protective systems for a given jobsite, the competent person should visually and manually test the soil, and also consult the shoring or shielding manufacturer’s tabulated data or OR-OSHA’s tables and charts designed for this purpose.

Recommendation #4: Employers must provide sufficient means of safe access and egress for workers in any trench excavation of 4 feet deep or deeper, which may include ladders, ramps, or stairs.

Recommendation #5: Keep excavated soil (spoils) and other materials and tools at least 2 feet from the edge of the trench.

Recommendation #6: Before working in and around trenches, employees should receive training on safe trenching practices, and on recognizing and reporting hazards.

Recommendation #7: Employers should develop and maintain a safety culture/climate where employees are encouraged to voice concerns about unsafe work conditions.

OR–FACE reports are for information, research, or occupational injury control only. Safety and health practices may have changed since the investigation was conducted and the report was completed. Persons needing regulatory compliance information should consult the appropriate regulatory agency.