In March 2015, a 34-year-old journeyman carpenter died when he fell 60 feet from a concrete form suspended below a bridge. The victim was employed by a joint venture company that was contracted by the state department of transportation to build a bridge across a lake. 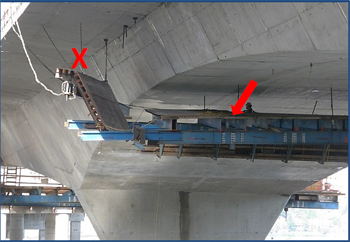 Incident scene showing the concrete form suspended below
the bridge. The X indicates where the victim was working
when he fell. The arrow indicates the anchor point of his
retractable lifeline.

In March 2015, a 34-year-old journeyman carpenter died when he fell 60 feet from a concrete form suspended below a bridge.

The victim was employed by a joint venture company that was contracted by the state department of transportation to build a bridge across a lake. He was an experienced journeyman carpenter and a crew foreman on this project.

On the day of the incident, a supervisor held a morning job safety analysis meeting with crew members to discuss hazards associated with the day’s task. This task involved dismantling and removing concrete forms suspended underneath the bridge. The victim and another employee assigned to this task had done this work many times during the project. That morning, the two employees working from the concrete forms suspended under the bridge removed the north wing wall portion without incident. 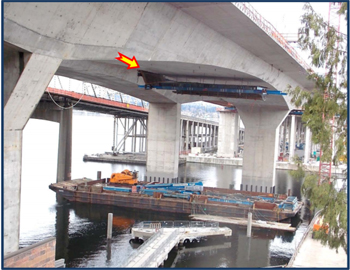 Incident scene showing the concrete form suspended beneath
the bridge. The arrow indicates where the victim fell from,
landing on the concrete pier below.

One of the rods was lowered three feet. An attempt to lower another rod was made, but it would not lower. He and his coworker then decided to try and lift the wing wall with rigging attached to a chain hoist in hopes of lifting some of the weight off the rod. When this did not relieve the pressure, they decided to cut the rod with a torch.

Keeping the chain hoist in place, the victim wearing a full body harness with a retractable steel cable lanyard went to the top of the wing wall and cut the rod. Cutting the rod caused the wing wall to shift. The victim lost his balance and slid down the wing wall and fell into an opening between the wing wall and the main concrete form. His lanyard cable severed when it went over the steel edge of the main form and he fell 60 feet to a concrete pier below.

The investigation identified that the victim’s fatal fall was due to improper use of the retractable lanyard. The victim was working more than 6 feet above his anchor point and during the fall the cable went over a steel edge of the form, both of which the lanyard manufacturer warns against. Also, there were retractable lanyards located above the victim that could have been used as an anchor point. 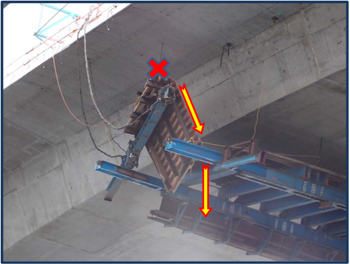 When an unplanned situation arises that exposes workers to fall hazards, stop, regroup and discuss what should be done to address the issues. If changes to the fall protection work plan are needed, make those changes and retrain all those involved.

Photo 1 shows the steel platform edge which the victim’s retractable steel cable lanyard contacted when he fell, causing it to sever. A red fiber from the cable is shown (red circle).

Photo 2 shows the victim’s retractable lanyard with strands of the severed steel cable.